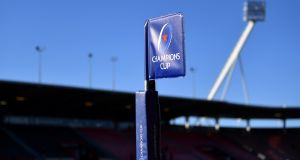 The French Government are to decide if French clubs can continue in the Champions Cup. Photograph: Dan Mullan/Getty

European rugby is facing a shutdown similar to last March. The Champions Cup must contemplate a “tournament suspension” due to the French government’s increasing fears about the new strain of coronavirus arriving from the United Kingdom and Ireland.

The French ministries of interior, health and sport will inform tournament organisers, European Professional Club Rugby (EPCR) on Saturday whether 14 of next weekend’s 19 fixtures involving French teams can go ahead.

“The French government is focusing on limiting the transmission of this mutant strain of the virus,” said an EPCR spokesman. “That is their priority. They have said that if they feel these matches present an increased risk of transmission, on French soil or not, they will be suspended.

“An overall tournament suspension is definitely an option if the French government decide on this course of action.”

Leinster’s trip to Franklin’s Gardens next Friday is already in doubt due to a Covid outbreak in the Northampton Saints squad that has forced a shutdown of their training facility at least until next Tuesday.

A domino effect caused by these cancellations could very well impact next month’s Six Nations and the entire rugby schedule in 2021.

French concerns about the protocols in place at UK clubs – which led to Toulon pulling out of the Scarlets game last month and Bayonne claiming infections of the new strain came from Leicester’s visit on December 19th – appeared to be allayed this week by EPCR adopting the Top 14 system of testing 72 hours before kick-off.

However, these protocols are under review following the French ministries meeting EPCR and Ligue Nationale de Rugby (LNR) on Thursday evening.

“EPCR and the LNR participated in a meeting by video conference with representatives of the French ministries of the interior, health and sport, as well as the president’s office,” continued an EPCR spokesman. “The objective of the meeting was to present the revised Covid-19 protocol for the fixtures in rounds three and four of the Heineken Champions Cup and Challenge Cup.

“Updates to the protocol include the addition of PCR testing no earlier than three days before fixtures, in adherence to new French government directives. This change supplements the existing contact tracing, with all measures put in place to limit the risk of transmission and to allow the tournaments to proceed.

“EPCR expects to receive a decision from the French authorities shortly.”

Midi Olympique reported that it is an “understatement to say that the government has not frankly appreciated seeing the British strain of Covid-19 arriving in France, in part, due to Leicester’s games in Bayonne”, which led to eight of the Basque squad subsequently testing positive.

Also on Thursday, France extended a travel ban from the UK “until further notice”. This could override an exemption for elite sport.

The Top 14 continues to be disrupted by the virus with Ronan O’Gara’s La Rochelle no longer travelling to Paris to play Racing 92 due to positive tests for the virus.