Grobler a clear and present danger for Munster

South African returns to Thomond Park with Gloucester this weekend 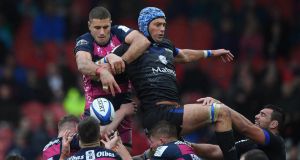 Munster are readying themselves for a smash and grab assault from Gerbrandt Grobler as he returns to Thomond Park for the first time since joining Gloucester during the summer.

Grobler only spent one season at Munster and his time was not extended after questions about his failed steroids test resulted in hopes of a new contract falling through.

Injury marred the first part of last season for the South African, and it was only towards the end of his time in the province that he began to show his undoubted talents, and Munster coach Johann van Graan feels there could be a big showing from the lock this Saturday.

“You’ve got to be conscious that GG [Gerbrant Grobler] will know our lineout calls,” said van Graan. “He’ll definitely know some of them. It’s the same when we came up against Donnacha [Ryan] in the semi-final last year. You can’t change your whole system because of one player.

“Look, GG was with us at Munster and he’s at Gloucester now and he’s doing really well there. We’ll do what we have to do and prepare accordingly.

“I think at the end of the campaign he did really well. I thought he played really well against Ulster in that home game, came off the bench a few times and made a big difference, like in that semi-final against Leinster.

“He’s a quality player with his ability around the lineout, you’ve just got to watch the way he catches a kick-off, he’s brilliant at that, and his offloading ability. He’s a quality rugby player and I think that’s why Gloucester bought him.”

Munster got their Pool 2 campaign off to a positive start by claiming a draw away to Exeter Chiefs last weekend, while Gloucester edged past Castres at Kingsholm and current lead the group.

Van Graan praised the performance of Duncan Williams at Sandy Park, and he us likely to start again in the scrumhalf shirt for this game with Conor Murray definitely missing out again because of his neck injury, while Alby Mathewson will be given “as long as possible” to shake off the effects of the knee injury he picked up against Leinster.

Keith Earls was a late withdrawal in Exeter and he had a scan yesterday on the hamstring injury he sustained. “We will know more later this afternoon or tomorrow. He’s a worry for us at the weekend,” said van Graan.

There was some positivity surrounding Chris Farrell, and according to the coach he could be fit in time to make a return during the November window. Farrell suffered a cruciate ligament injury in Irish training ahead of February’s Six Nations, but he is stepping up his rehabilitation now.

“Chris Farrell is running very well. I don’t foresee him being back over the next two or three weeks. We might have an opportunity over November but then there are the Test matches as well. I don’t want to speculate on him but as soon as I know I’ll give you an update.”

Last weekend Dan Goggin made his European debut in the centre for Munster alongside Rory Scannell, while his replacement Sammy Arnold was also due to see a second specialist on Monday for the throat injury he suffered.

“Sammy was on the far side of the field, one of their players took an outside break. He tackled him and his boot kind of hit his throat.

“He had a lot of pain. The doc immediately said ‘Listen, it’s a very sensitive part of the vocal chords and the neck’. We took him off straight away and took him to hospital straight away as a precautionary measure.

“He saw a specialist there, they discharged him. He’s in good spirits. He was in this morning but he’s going to see another specialist now to make sure because it’s in such a sensitive part of the body.

“We’ll take it day-by-day and if is nothing serious, hopefully he will be ready for the weekend but it is pretty difficult to tell now.”