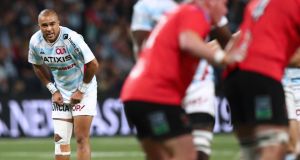 As ever, a Heineken Champions Cup weekend never fails to deliver its truckload of moments and talking points, whether it be vexed red cards (or lack of), surprises, great rugby, great tries and, of course, premature try celebrations.

After the futuristic setting of La Défense Arena for Ulster’s visit to Racing on Saturday night, Sunday’s journey to the Stade Ernest Wallon was like a trip down memory lane.

There Toulouse were, almost structureless, relying largely on individual instinct, and their footwork, offloading and pace, to thrillingly transition from defence to attack.

The 80m turnover try conceived by Louis Madaule, Yoann Huget and Sebastien Bézy, and finished by Maxime Médard, was vintage Toulouse, and reminded us how one moment can still utterly transform any pool.

Toulouse have ridden their luck and emotional waves to top it, and still look a long way from title contenders, but it’s good to have such a classy club back, although Leinster will still be kicking themselves.

As for Simon Zebo taunting Michel Lowry as he ran in Racing’s fifth try, anybody who first came upon some of the ensuing outrage before seeing it might have been forgiven for thinking he’d done something utterly despicable.

Or at any rate something really terrible, and that rugby had slipped over the moral precipice, never to recover again. Only to then discover that, well, he’d pointed his finger!

For sure it’s understandable that some people found Zebo’s actions were distasteful. You wouldn’t have blamed Lowry for decking him.

But quite why this one incident has generated such a heated debate is a moot point. It’s not as if, a la Freddy Burns’ premature celebrating against Toulouse in round one, Zebo’s actions contrived to change the actual result of what was a free-flowing, richly entertaining game, which provided so much else to talk about.

But we seemingly live in a world where judgments have to be hasty, rather than considered, and then to be more vehemently maintained; when actions are more readily condemned, especially anonymously, and there’s less acceptance that sportspeople, no less than anyone else, can actually make all manner of mistakes.

It’s also easier to latch on to one incident than an entire game. But by the same token, it was a momentary, giddy lapse. This wasn’t a preconceived, or thought-out, action.

So many worse things happen in sporting contests generally, and in rugby matches, which are both more malicious and vicious. But this sport does have a po-faced tendency to take itself very, very seriously.

In much of the condemnation that followed one thing was largely overlooked. Zebo apologised! He may have been prompted to do so initially by Nigel Owens – which, of course, caused further outrage for some – but honestly, there was no doubting the sincerity of Zebo’s regret less than half an hour later.

He was genuinely embarrassed and ashamed by what he’d done. A big-hearted, good-natured, generous person, as evidenced by his contributions to various charities, he even said this was not the example he wanted to set his kids. He made a mistake.

It takes a big person to admit they were in the wrong and apologise, publicly or privately, and while for some any stick will do, on this episode one senses the quieter majority were forgiving.

Bath should follow his example. It was verging on hilarious that the weekend’s fare all kicked off to the backdrop of reports in England that Bath were set to lodge a complaint with the tournament organisers and seek a replay of their first round defeat by Toulouse.

Presumably they wouldn’t be seeking a rematch had they won! But actually, above all else, Bath are just coming across as bad losers.

The premise, or premises, for their ‘appeal’ borders on ludicrous, namely that the referee, Andrew Brace, blew the final whistle with two seconds left on the clock and so denied Bath an attacking lineout.

When one thinks of the many far greater injustices arising from mistakes by officials, this is also quite spurious.

Like most multi-millionaires, he’s also probably used to getting what he wants. Yet the odds on Bath succeeding with this appeal are beyond remote. They must know this.

It’s bad enough that recourse to video replays, all the more so with the justified clampdown on high hits, has combined to pile more pressure on officials and taken appealing by players as well as crowds to new levels.

Imagine the damage to the sport if any game were ever replayed due to a refereeing mistake?

Seeking a rematch over a lineout that wasn’t and/or two red cards that weren’t, highlights just how much Bath seem to think they can make the rules.

This, after all, is the club owner who was in the vanguard of breaking up the tournament’s former organising body, ERC, with a new one EPRC, which has singularly failed to deliver on many of his and their avowed promises.

Maybe, in future games at the Rec, all visiting sides should start with 13 players and, akin to ‘Fergie time’ at Old Trafford, the home side should be left in charge of the match clock, so as we can all keep playing until Bath draw level or win.

In the heel of the hunt, Bath’s actions suggests that a once great club – with one of the quaintest grounds in one of the most beautiful cities in England – have simply lost the run of themselves.

Above all else, it comes across as unbelievably arrogant.

1 Gerry Thornley: Home and away Six Nations could be its ruination
2 Aviva 10-year ticket holders seek clarity over payment
3 Eddie Dunbar stays in the saddle as he eyes a return to the grand stage
4 Coming fourth in the Olympics didn’t change this fearless quartet, time did
5 Record numbers watch Woods v Mickelson charity match
Real news has value SUBSCRIBE