Simon Zebo revelling in his home from home at Racing 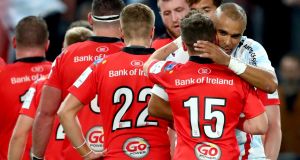 Zebo hugs Michael Lowry of Ulster at the end of the game. Photo: James Crombie/Inpho

The Irish squad for the November Test window will be unveiled on Wednesday and Simon Zebo would not be human if he didn’t feel a twinge of sadness when his name is not included. But he also knew the fairly inevitable consequences of his move to Racing 92, and Saturday’s 44-12 win over Ulster also demonstrated the flipside of the coin.

Watching him dovetail ‘live’ with his kindred spirits, especially Finn Russell, made you appreciate that if Zebo could have handpicked an alternative home for the way he likes to play rugby, it would probably have been Racing 92. At the Arena where it never rains, they are given full rein to put on a show where the premium is very much on entertainment, however it is dressed up or blasted out in a venue without natural grass, light or – pretty much – noise.

He, his partner Elvira, and children Jacob and Sofia are happy out with their new life, and so is he with his nouveau rugby experience.

“It has definitely been everything I thought it would be and more. I’m delighted I made the decision. It was a big decision for me to make considering what I had at home and that but I am very happy I did. They are a great bunch of guys, great coaching team. I am playing in quality atmospheres every week, which is exciting. When you are playing away from home you really feel that it is a little bit different in terms of the leagues. Change is always good and new is good. I’m enjoying it a lot and hopefully I can continue to do so.”

In any event, when the Irish squad is announced, he knows the score for the time being at least. “Down the line I would probably have to solidify my form. It would have to be a whole season long, I would have to score a try every single game, be man of the match. That’s the way it is. I haven’t talked to . . . people back home in about a year now. If there is no communication coming one way I know the deal so I am not going to sit around crossing my fingers. I’m just going to keep enjoying my rugby here.”

Nor is it just the rugby Zebo is enjoying in the French capital he knows from his youth and where his father grew up.

“Food has never been my strong point in terms of discipline but I wouldn’t change it for the world. I am the way I am, and I’m not going to change. I’m feeling good, I’m feeling fresh, my mind is fresh more so than anything, which means I have a little bit extra drive.

“When you’re in the same place for so long, playing the same thing over and over again, it’s just natural that the ambition wouldn’t always be as strong as it is coming into a new environment, a new team and trying to impress new people. So I’m excited.”

The Top 14 is on a par with Europe, while the memory of last season’s final is “definitely at the back of the players’ minds, especially when they probably shot themselves in the foot, if you look back on it. It is a final that got away from them”.

That Zebo stayed on the pitch against Ulster despite strapping to an injured left knee that had been causing him pain from the first half demonstrated how much playing against an Irish province (other than Munster) meant to him.

“That’s still a grudge match, a derby match, for me, regardless of whether I’m in Racing colours or not. I would have hated to lose to them more so than losing to a French team so I’m just happy we got the win.”

This additional motivation may have explained why he uncharacteristically pointed a finger at Michael Lowry before grounding the ball.

“I’m still sick about it,” admitted Zebo. “I had to wait 10 minutes outside the dressing-room to give him my jersey and apologise again. I’ve played the game for I don’t know how many years and I’ve never done anything like that. I just got too excited. I probably built up the game a bit too much in my head this week and just let the emotions get the better of me for a few seconds.”

Expressing genuine remorse, Zebo also admitted: “You live and learn. I wouldn’t want my kids to do that and I’m very disappointed with myself. I feel shit, but he’s a lovely fella. Jeez, he’s some feet, electric with the ball in hand.”

This game also showcased Zebo’s big left boot, and there were a couple of breaks, while he never lost the ball in contact, and the try was his seventh in seven games. It’s play what you see, and he says this is easy in tandem with Russell, labelled the X facteur to his Z facteur.

“There’s no shackles, there’s no fear, we’re able to do things. Just one call or one whisper on the pitch and it happens.

“We’re very similar, and very similar people off the pitch as well. He likes to play what he sees, play with flair, he’s not afraid of making mistakes and we bounce off each other quite well. I think we just understand each other from the get-go, and it’s exciting when we line-up together too.”

He’s found his home from home.

Pete Sampras: The forgotten great with the best serve in the business 11:10
Simmons: England West Indies series a blueprint for cricket 10:17
Different Strokes: Frankie leaves Fleetwood for Hollywood 10:00
Dan Carter to return to Christchurch as an Auckland Blues player 08:08
Ralf Rangnick named new Milan boss for 2020-21 07:54
Crossword Get access to over 6,000 interactive crosswords