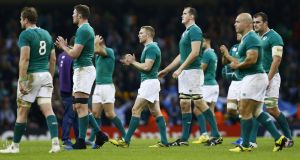 Amongst the many ambitious goals in the IRFU’s Strategic Plan for the next five years, which was launched yesterday, were to reach the World Cup semi-finals or better in both 2019 and 2023.

Allowing for the considerable obstacles which potentially lie in wait, not least a possible 2019 quarter-final against either the All Blacks or Rassie Erasmus’s rapidly improving Springboks, pretty much everything is in place to have a realistic chance of reaching such uncharted territory.

A settled winning team, which has risen to second in the world rankings, and high-class back-up staff ensure that Ireland look better set than many other teams, with most combinations in place and strength in depth.

Indeed, there should be a solid foundation for the 2023 World Cup as well, although with that four-year cycle in mind the question of the head coach remains to be resolved. Joe Schmidt’s current contract expires at the end of the 2019 World Cup and he said at the end of the winning series in Australia that he would make a decision on his position by the end of the year.

Accordingly, IRFU CEO Philip Browne estimates that will be the timeframe for either Schmidt to agree to sign a new deal or signal his intention to step down, thus enabling the IRFU to appoint a successor. In that scenario, current assistant/defence coach Andy Farrell would be the favourite for a promotion.

“Joe has said he will have a better idea of where he is at after the November internationals, so I would imagine by the end of the year we would be in a position to know what his plans are and then [that] gives us the opportunity to get all of our plans [in place],” explained Browne.

Asked if, a la Don Corleone, they would make Schmidt an offer he couldn’t refuse, Browne declared heartily: “I thought we did that the last time!”

Browne then made it clear they would ideally like Schmidt to remain in place. “He’s done a fantastic job, and it’s not just about Joe, it’s about the people he has gathered around him, as a collective – both in terms of the team management and their interaction with the high performance department and their interaction with the provinces, and the quality of coaching and personnel that are now in the provinces.

“It is a collective and at times people, certainly outside of Irish rugby, don’t understand that, and Joe is an important part of that collective and has done a fantastic job. At the end of the day, David [Nucifora] is having conversations with Joe until he makes up his mind and we will be thinking about it once the November internationals are under the belt.”

Either way, Browne believes these goals, along with two or more Six Nations titles in the next five years, are attainable.

“My father in his wisdom used to say graveyards are full of people who thought they were indispensable. The reality is the plan can’t be built around one person, it has to be built around systems, processes and structures, and that is effectively what David has laid out there in front of you.”

“We go out to win every match and that’s the reality. But there is a base level, benchmark, that we want to achieve. The notion that we put it up on a piece of paper and we get to the semi-final and say, ‘Great, job done, let’s go off and have a party’, that’s kind of naïve. The reality is our teams have aspirations, they have ambition, they are all professional players, professional coaches, they are not going to be satisfied unless they go out and try to win every fixture, and that’s what happens.”

The highly aspirational Strategic Plan also targeted being in the world’s top three consistently, two or more European titles, two or more Pro14 titles, and for the Sevens team to qualify for the Tokyo Olympics and the World Rugby Sevens Series (and to finish in the top eight consistently).

There was also a strong emphasis on the women’s game following the lengthy post-World Cup review, with particular focus on increasing drastically participation, in part through the Sevens game, and an ambitious target of having 20 per cent of all rugby committees throughout the game filled by women. However, the IRFU has stopped short of contracting or paying women players.

If the plan’s provincial goals are to be reached, the likelihood is that Leinster will be the chief providers, especially given that Munster haven’t won a trophy since 2011 and Ulster since 2006.

“What we do have to realise is that 50 per cent of the rugby population and about 50 per cent of the entire population is based in Leinster, so it’s no surprise that Leinster are in the position they are in,” said Browne, after noting the off-field difficulties at Munster and Ulster, and the prospect of improvement there under new coaches.

“They [Leinster] also have this unique advantage of an incredibly vibrant schools scene – so they are almost unique worldwide in terms of the advantages they have.

“Can we recreate that environment in Ulster and Munster? I don’t think we can because it’s different. There are elements of similarity in the schools system in Ulster and it’s how we try and bring that on. Munster is difficult in that there are not as many schools, it’s much more club based, so each province is slightly different – so if you’re asking me are we getting the most out of all four provinces, the answer is probably not. I include Leinster in that, we can get better across all four provinces.”

On top of this, the Leinster system is so relatively overloaded with talent that they are not only bulk supplying the Irish squad, but the other provinces as well. Even though this runs the risk of the other provinces losing their identities, David Nucifora, the IRFU’s performance manager, didn’t have any problem with this trend increasing further.

“If they’re the best players available that are out there, then absolutely. That’s what it’s about. It’s about having the best players playing the game, and I think you take your hat off to the young players that have decided to make those moves because they are ambitious,” he said.

Key IRFU targets for the next five years

– To be ranked consistently in the top three in the world

– Qualify the Sevens teams for the Tokyo Olympics