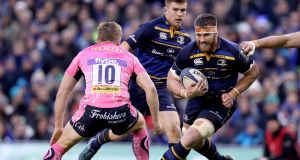 Sean O’Brien: The Lion’s return to competitive action will be welcome news for Leinster coach Leo Cullen in advance of the Champions Cup semi-final against Scarlets. Photograph: Tommy Dickson/Inpho

In conversations Leinster players and coaches tend not to do games that are almost two weeks away. With Zebre last week and Benetton this week in the Pro 14, Italian clubs can sometimes be a hard sell.

This week league is the immediate concern. But the semi-final meeting with Scarlets in the Champions Cup on April 21st is the elephant in the room.

Once again backs coach Girvan Dempsey has a list of injury concerns that break down into green, amber and red with some of the players anxious to move into the go zone this week in order to line up for selection for the Scarlets.

Luke McGrath has been ruled out for the Italian job but Seán O’Brien hopes to play and Jordan Larmour is back in full training.

McGrath injured his ankle against Saracens in the Champions Cup quarter-final but the protective boot he has been wearing has come off. His availability remains important because of the two foreign player rule. If McGrath is out back up scrumhalf Jamison Gibson-Park will play and either Scott Fardy or James Lowe will not.

In his own right McGrath has grown into a pivotal player in the Leinster team. From schoolboy to central cast his game has been refined from an all-round action player in the mould of a flanker into a more focussed scrumhalf and captaincy material.

“Luke is  making good progress. He’s out of the boot,” said Dempsey on Monday. “He’s walking around looking to up his rehab. With some guys it’s more prudent in how you look at your picture in terms if their selection. You just  got to make sure your players are hitting their markers, making sure you are not compromising their return and impacting on the end of the season. That’s a case for Luke.

“He’s growing and maturing nicely in terms of big games, exposure in those big games. That’s what he’s learning a huge amount from. You can see he’s got the right temperament. He’s shown that through captaincy through schools, age-grade right up to us at senior level. He’s one of the leaders that we look to as well.”

In the case of McGrath the process was to temper his enthusiasm for getting involved in certain aspects of the game. In the early stages the 25-year-old could be stuck in a ruck looking for turnover ball when the coaches wanted him positioned to pass the ball out.

It was less a flaw in his ability than a change of emphasis in what the team needed him to do. Leinster saw his scrumhalf skill-set needed to be more readily available to their offensive strengths than scrounging ball at the breakdown.

“You look at him and see how he has progressed his game,” explains Dempsey. “What I remember seeing as a young kid in St Michael's is that he just had an abundance of energy and he was like a ball of energy, involved in everything.

“It was trying to curb him in his understanding of his role as a nine. He was nearly playing as a seven because he was in nearly every breakdown. He was getting poaches. It was  tough because it was impacting on how the back three worked and how his defence happened. He was stuck in breakdown and we wanted him to play quick.

“Now it’s his sharpness, that real zip with his strength when he is on the ball and the speed at which he can clear allows us to play quick.”

If McGrath is fit for the match against Scarlets, it means Leinster’s non national contingent are likely to be Fardy and the dynamic James Lowe, whose pitch personality brings significant energy to the Leinster attack. In one-on-ones with some space “his eyes light up,” says Dempsey.

Jordan Larmour will train fully over the coming days following a calf injury, while Rhys Ruddock, whose hamstring flared up post Saracens, and Jack Conan will both rehab this week.

So there’s more good than bad across the squad. Dempsey is certain players will not be rushed back who are not 100 per cent fit to play.

Tom Daly has also returned to full training, while Noel Reid has recovered from an eye-socket injury.

O’Brien, who suffered a dead shoulder in Leinster’s Pro14 game with Scarlets, believes he will be fit to play. His shoulder injury, which happened on his comeback game from a hip problem, had the potential of turning into something of a saga. But no, Dempsey is certain he is close to playing again.

“He is an international backrow player,” said the former Irish fullback. “I would be hopeful he would be available for selection for Treviso.”