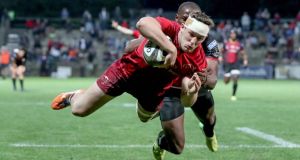 Munster’s Dan Goggin scores a try despite the efforts of Michael Makase of the Southern Kings during the Guinness Pro 14 game at Outeniqua Park in George, South Africa. Photograph: Dan Sheridan/Inpho

Munster coach Johann van Graan will have been reasonably satisfied with a bonus-point victory following the Guinness Pro 14 clash at Outeniqua Park given the circumstances surrounding the match. Injuries and a requirement to rest some players in the wake of the physical toll of travelling to South Africa and the bruising legacy of the Toulon match compromised his selection.

The only downside, outside of some initial teething issues in terms of performance from a squad containing several players with minimal experience at this level, was an injury to loosehead prop James Cronin, who was escorted from the pitch on nine minutes, clutching his hand/arm. A medical prognosis on his fitness, particularly in light of the Champions Cup semi-final will be available following a scan.

Munster, as befits a relatively callow side in some areas at this level, suffered a stuttering start but a strong finish to the half and a recalibration at the interval, saw them rack up six tries, including a stunning length-of-the-pitch effort finished off by centre Dan Goggin, his first for the province and one he celebrated.

“We couldn’t just leave our heads down and take it for granted that we were going to walk this after such a big win last week,” said Goggin. “They tested us at the start and it was a tough fight to come back in the end. It was lovely to get my first try.”

Munster captain CJ Stander bagged one of the tries on his return to his hometown of George but it was a number of the younger players whose performances caught the eye. Calvin Nash, another try scorer, had a fine game on the right wing; Rory Scannell was outstanding in the centre, forming a decent midfield partnership with Goggin; while replacement Stephen Fitzgerald made a huge impression during two cameos.

For those players to have a decent platform required some of the experienced coterie around them to provide a framework and this they did – Stander, John Ryan, replacement Dave Kilcoyne, Dave O’Callaghan and a hugely physical secondrow pairing of an excellent Gerbrandt Grobler and Jean Kleyn, punching holes and providing quick possession.

Kleyn admitted: “It was a very important win for us, a first in South Africa, hopefully the first of three-in-a-row.”

It wasn’t perfect, far from it in the first half, where at one point Munster trailed 15-3, but there was always a sense that once the visitors rectified their own shortcomings, they’d be able to quickly accumulate points.

Place-kicking and the lineout also proved troublesome but in the end it didn’t matter. Errors pockmarked the initial feeling out process; basic handling mistakes meant that the game was lively in endeavour but rather disjointed.

Southern Kings fullback Masixole Banda missed an early long-range penalty before Munster settled in earnest, facilitated by overwhelming scrum dominance, a facet of the game that was to provide a remarkable starting point for their second try in first-half injury-time.

The visitors played with good tempo and nice variety to their patterns and but for the occasional misdirected pass or dropped ball might have racked up a couple of tries rather than a solitary penalty after 16 minutes from Ian Keatley.

It appeared a matter of time before Munster’s superior attacking gambits would pay dividends, but an incident on 24 minutes completely changed the nature of the game after Grobler was penalised for charging into a ruck, leading with his shoulder without wrapping his arms as he attempted to clear out an opponent.

After consulting with the television match official, referee Lloyd Linton reversed a penalty that had initially been awarded to Munster and also brandished a yellow card. Before he returned Muster had conceded two tries and trailed 15-3. Some of the visitors’ tackling was brittle and culpable but it would be churlish not to acknowledge some great running lines and support play.

Niall Scannell’s try on 37 minutes was an example of what Munster could achieve if they cut out the mistakes but a massive momentum shift came in first-half injury time. The Southern Kings had a scrum in the Munster 22 but were penalised, and from there, via a lineout, the visitors put together a beautiful three-minute passage of rugby that culminated in a try for Nash.

Fitzgerald made a couple of thrusts, JJ Hanrahan attracted a couple of tacklers and his timing and disguise of the pass was matched by Nash’s angled run, embellished by speed and strength. Keatley was having something of an off day with the boot but those two tries saw Munster reduce the interval deficit to two points, 15-13.

Reducing the error-rate, Munster dominated the second half, Keatley’s super break leading to Stander’s try but the next, scored by Goggin, merits a more robust description. Running ball from the 22, Rory Scannell’s long pass saw Nash escape down the touchline, the latter returning the compliment, before Rory Scannell’s gorgeous reverse flick gave his midfield partner a clear route to the try-line for the bonus-point score.

Replacement Rhys Marshall and Kilcoyne ensured that Muster could freewheel towards the final whistle. The Cheetahs should provide more resolute opposition next weekend but the more immediate concern will be Cronin’s injury.

1 Sam Bennett struggles as Roglic wins Stage 10 of Vuelta
2 All-Ireland Senior Football Championships: a county-by-county guide
3 Bennett punished for pushing his luck to fall foul of VAR’s narrow line
4 Jackie Tyrrell: We’ve got the championship back. But where’s the physicality?
5 History suggests England should keep their part of the bargain
Real news has value SUBSCRIBE