Patience proving a necessary virtue as Carbery bides his time 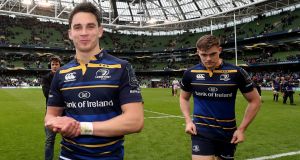 Joey Carbery and Garry Ringrose after the Champions Cup quarter-final victory over Saracens at the Aviva Stadium. Photograph: Dan Sheridan/Inpho

Patience has been a requirement in the career of Joey Carbery. Doing what he doesn’t want to do takes a certain kind of passive energy.

With Rob Kearney and Johnny Sexton both casting large shadows ,Carbery’s watching brief requires him to hit his marks when he doesn’t know when he is going to play, what position he will play or for how long he will play.

Since the end of October 2017, Carbery has been involved in three matches with Leinster and six with Ireland. But just one has been a full 80 minutes Pro14 match against Ospreys on March 24th.

After the 22-year-old played a full match against Glasgow on October 21st his next run was for five minutes for Ireland against South Africa followed by 64 minutes against Fiji in the November Series. Against Fiji he was on long enough to fracture three bones in his left wrist. Sayonara until the end of January.

“My last 80 minutes was last week against Ospreys,” he says at a promotional event for Avonmore Protein Milk. “With the injury and stuff, it was annoying. It delayed me a lot.

“It goes down to what the coaches want. I know when I’m on the bench I can cover 10 and 15. I would love to be first-choice fullback. But it’s pretty hard to get ahead of Rob when he’s playing as well as he is. I don’t want to be pushing just to be number one.”

In the Six Nations Championship, Carbery had 29 minutes of pitch time against Italy, the most he has had in 10 international appearances. He played three minutes against Wales, seven minutes against Scotland and came on for 20 minutes in Twickenham against England.

Otherwise it has been 22 minutes in January for Leinster against Montpellier, the full game against Ospreys last month and 13 minutes in Leinster’s Champions Cup quarter-final win over Saracens last Sunday.

In over five months, from November to April, Carbery has played 128 minutes with Ireland and 115 minutes with Leinster, that’s a little over four hours rugby.

“It is tough,” he says. “When you start a game, the first five minutes you kinda get a feel for what the game is going to be like and what the other team is going to be bringing.”

“But when you are a sub, you kinda have to observe and get a feel for what might be happening – like the line speed and the tempo and stuff.

“The mindset you have when you are going on is to try and fit in, and then you can build on it, adapt and get used to it, then try as quickly as possible to start playing.”

Carbery rightly does not see himself as a bit player and in most of the Irish matches has contributed to the scoring. Against England his 20 minutes stretch was as testing as any and he landed a conversion. Against Italy he scored three and against the Springboks, two.

There is a sense too that playing a waiting game has treated him well, the sense of achievement and being part of history reasonable reward.

He has also spoken to Joe Schmidt, Leo Cullen and Stuart Lancaster about his role and his place and on that he has a clear view. He also knows that imperious Kearney and Sexton are both 32-years-old. From his side of the trophy cabinet there are no diva rants, no frustrated blow-outs.

“They [coaches] understand that’s it’s a 22 man game, it’s not just the starting team,” he says. “So sometimes a sub can make a huge impact. You saw Dan Carter there for Racing on the weekend, coming on and setting up a try.”

There is often a point where personal ambition and team ambition diverge. The competitor in Carbery wants the 10 and 15 jerseys. The pragmatist in him tells him, at his age, to be grateful and listen to more experienced voices.

His impression is others looking on are more impatient for his career than he is. It’s also a grave error to misread his soft spoken-views and measured personality as a player lacking in ambition.

“I am very ambitious,” he says finally, weary of the inferences to him being happy to play second fiddle. “If I could be number one choice, I would be. Look, I can’t be impatient. Otherwise, it won’t happen. I’m pretty happy with where I am at the moment.”

He has never lost with Ireland, has beaten New Zealand, won a Grand Slam and is in the semi-final of the European Champions Cup. So, all in all, he should be pretty happy.