Leinster hopeful Sean O’Brien will be fit to face Treviso 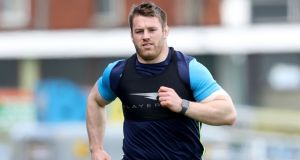 Luke McGrath is one of a number of Leinster players in doubt to face Benetton Treviso this week in the Pro 14. The Leinster scrumhalf went over on his ankle against Saracens and will be further assessed as the week progresses but is “unlikely to be available for selection.”

There is better news for Sean O’Brien and Jordan Larmour with Leinster management hopeful that O’Brien will play this week. The Irish backrow has been positive about his return to competition and has been “hitting his markers” at Leinster training sessions.

O’Brien suffered a dead shoulder in his comeback game against Scarlets in the league last month.

Larmour has recovered from a calf injury and is expected to fully train this week, a timely return with Leinster’s European Champions Cup match against Scarlets the following weekend.

Jack Conan, however, injured his knee against Ospreys and will again miss the weekend’s game with a view to resuming training next week.

Rhys Ruddock is another player who is unavailable to play this week. The backrow will continue rehab of his hamstring and is in a race against time. Ruddock had a flare up of his hamstring injury post-Saracens.

Leinster suffered no fresh injuries during their bonus point win over Italian side Zebre last weekend.

‘I want that gold medal’: Rhys McClenaghan talks Tokyo Olympic aspirations 07:02
Five Golf Classics for you to tee up at in 2020 06:00
Out of the shadows: Floodlights a priority for clubs across Ireland 06:00
AFL’s equalisation policies a possible guide for the GAA 06:00
Murphy confident Donegal remain on the right track 06:00
Here is your handy guide to sport on television this week