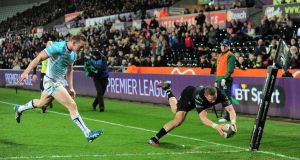 Hanno Dirkson of Ospreys scores a try in their Pro14 win over Connacht. Photo: Alex Davidson/Inpho

Connacht were forced to accept the inevitable in Liberty Stadium on Friday when they relinquished any remote hope of attaining a Champions Cup place.

Ultimately a stuttering start to the season back in September under a new coach had left them with too much to do at this end, and Ospreys were in no mood to accommodate them, displaying a renewed swagger since Steve Tandy was axed in January and replaced by forwards coach Allan Clarke.

Three victories on the trot, including Leinster’s scalp had put the Welsh outfit in the driving seat, a point ahead of Kieran Keane’s side and with a game in hand, while Connacht’s exit from the Challenge Cup last weekend had left them deflated and it showed last evening in their performance and on the scoreboard.

They handed Dan Biggar an early opportunity and the man of the match opened with a penalty just inside the half-way mark after Connacht were pinged for crossing. With some astute kicking, the home side kept the pressure on Connacht, and when Keane’s side coughed up another penalty for offside, Biggar stroked his side ahead 6-0 after nine minutes.

Connacht created a first scoring opportunity when fullback Dan Evans was sinbinned for a deliberate knock-on, but from the ensuing attack outhalf Carty put too much weight on the kick for the Niyi Adeolokun.

Connacht, however, recovered and once again attacked the Ospreys’ line after a well-worked drive from the pack, but when the ball was spread wide, disaster struck when an attempted pass from centre Eoin Griffin was well spotted by right wing Jeff Hessler who intercepted and ran the length of the pitch for a gifted try after 15 minutes. Biggar added the extras for 13-0 lead after 16 minutes.

It was real knock for Connacht, who continued turning over possession too easily against a team determined to overhaul local rivals Cardiff for the spot in the Champions Cup. It did not get much better for the beleaguered Connacht side until a penalty to touch gave the some momentum. Kieran Marmion determinately forced his way forward, and eventually temporary replacement Craig Ronaldson exploited space on the left space to touch down and add the conversion, narrowing the gap

Although Carty returned to the field, Connacht lost Sean O’Brien with a head knock, and although John Muldoon made an entrance, the reprieve didn’t last long. Ospreys regained the initiative from a penalty to touch, and it was the footwork of fullback Dan Evans who caught the defence before finally shimmying past Matt Healy for third try after 27 minutes. Biggar potted the easy conversion and the home side was well in the driving seat with a 20-7 lead.

Connacht continued to struggle at the breakdown where the Ospreys were adept at making a nuisance of themselves to stymie quick ball, but eventually Connacht forced a penalty which Carty struck perfectly to reduce the arrears to 20-10 at half-time. It gave them some hope of recovering, but within six minutes of the restart Carty missed what looked like a straightforward kick in front of the posts.

Up against a team boasting some 330 international caps, Marmion and Dillane did their best to add some urgency to Connacht’s attack, while in defence Tiernan O’Halloran was twice called on to produce superb tackles to deny Hassler. Under immense pressure, Connacht held out until TMO ruled Scott Otten had breached the line, and Biggar continued his target practice, extending the lead to 27-10.

Thereafter the result was academic. Although scrumhalf Tom Habberfield was denied a try for a forward pass, left wing Hanno Dirksen grabbed the fifth, and although Biggar missed his only kick of the night, his 14 points earned him the Man of the Match. No such accolades for Connacht.