Rugby: Who’s in and who’s out at the Irish provinces 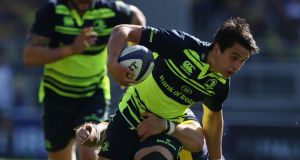 The memories remain vivid but professional sport permits but the briefest pause to enjoy success. Leinster’s record breaking double of Champions Cup and Guinness Pro14 is now consigned to a fourth star on a jersey and a chapter in the history books, as the new season begins in earnest at the end of the month.

Isa Nacewa, Jamie Heaslip and Richardt Strauss have retired; Joey Carbery has relocated to Munster and Jordi Murphy to Ulster while Girvan Dempsey left for Bath to be replaced by Felipe Contepomi. It’s hardly a state of chassis when weighed against the upheaval in Connacht and Ulster but there are some interesting questions to be answered.

There is the enticing prospect that Contepomi can translate the swashbuckling style from his Leinster playing days, the instinctive brilliance and vision, to his new role as backs’ coach. There will be a significant list of beneficiaries beyond the first choice backline; Ross Byrne and Ciaran Frawley to highlight two.

It isn’t a change of rugby orientation – Leinster play outstanding attacking rugby under the direction of Leo Cullen and Stuart Lancaster – but the Argentine will bring fresh eyes and boundless enthusiasm that may refine and develop the individual as well as the collective.

Nacewa set standards and drove them, especially when the international cadre was away with Ireland. Cullen will be keen to identify a successor(s) a pivotal role especially in a significant tranche of Pro14 matches.

Leinster are the largest contributors to the national squad and therefore most vulnerable to a high turnover in personnel at various stages of the season. Joe Tomane’s versatility and quality is a welcome addition.

There is no British & Irish Cup outlet so the scramble for game time will be particularly intense, especially for some of the younger squad members. Leinster’s academy production line remains blue chip in quality, especially up front. A chunk of the squad is out of contract at the end of the season, a scenario that’s less fraught for front-line players than those seeking to achieve that status.

Munster waved au revoir to Simon Zebo but have added Carbery, Tadhg Beirne, flanker Arno Botha and the 23-year-old Mike Haley, Irish qualified through his Tralee born grandmother and an obvious replacement for Zebo at fullback. Sale Sharks rated him very highly and weren’t pleased at losing him.

Johann van Graan will have some interesting choices in several positions, especially in deciding a pecking order at outhalf and centre where Carbery, Ian Keatley, JJ Hanrahan, Tyler Bleyendaal, Rory Scannell, Sam Arnold, Jaco Taute and Chris Farrell will expect to be accommodated.

Backrow is another area in which Munster boast significant resources from established internationals in Peter O’Mahony and CJ Stander, South Africans Chris Cloete and Botha, and outstanding young players in Jack O’Donoghue, Conor Oliver and Jack O’Sullivan, once the latter recovers from injury.

Simon Easterby will guide Ulster until Dan McFarland’s release can be secured from the Scottish Rugby Union. The province has lost three standout players to retirement, Tommy Bowe, Andrew Trimble and Jared Payne – the latter takes over as defence coach – while Paddy Jackson and Stuart Olding are seeking to restart their lives and rugby careers in France. The peerless Charles Piutau departed for Bristol.

Will Addison, who linked with the Irish squad for a week in Australia during the summer, joins from the Sale Sharks, while Marty Moore and Jordi Murphy, outstanding for Leinster last season, add obvious quality. Billy Burns was signed from Gloucester and will dispute the outhalf role with former underage international Johnny McPhillips. Michael Lowry is a superb prospect but the roster at 10 is callow in terms of elite game experience.

Easterby and his coaching team will be hoping that Rob Lyttle and David Busby can stay injury free and deliver on their talent as Ulster are a little light in depth out wide in the three quarter line. Marcell Coetzee and prop Schalk van der Merwe will feel like new signings given their injury issues last season while Ulster have also recruited a couple of club players in Terenure College and former Ireland Under-20 secondrow Alex Thompson and Lansdowne scrumhalf Alan Bennie.

Connacht’s new head coach Andy Friend brings and extensive CV from his time with the Waratahs and Brumbies, his role as skills coach under Eddie Jones at the Wallabies and three years at Harlequins.

John Muldoon retired and has taken up a coaching role with Pat Lam at Bristol bringing to an end one of the great Irish rugby provincial careers. The 23-year-old David Horwitz (Rebels) will challenge Jack Carty for the outhalf role, Zimbabwean born Kyle Godwin (25, Brumbies) is a centre, while 21-year-old, Fijian, Sevu Reece is a livewire presence that can play right across the backline.

Cian Kelleher missed a sizeable portion of last season through injury. Coby Fainga’a (27) is a flanker and younger brother of Wallaby international twins Anthony and Saia. Robin Copeland was arguably Munster’s most impressive performer through the final couple of months last season and is a fine addition while Ulster born hooker Jonny Murphy joins from the Rotherham Titans. Secondrow Joe Maksymiw (22) has been recruited from the Leicester Tigers.

Leinster used 55 players in winning the Champions Cup and Pro14 titles last season so depth to the playing roster is a massive constituent. In Europe the Irish provinces will once again face the chequebook marquee signings in England and France in a calendar year when the IRFU’s player management programme will have to be attuned to the Rugby World Cup in Japan in the autumn of 2019 and the prospect of playing 12 or 13 test matches in the build-up to that tournament; in some respects what will feel like a never ending season.

Transfers in and out