Ireland women to meet New Zealand after seeing off England 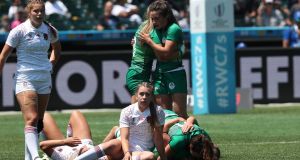 Ireland will play New Zealand in quarter-finals of the women’s World Cup Sevens after securing a brilliant 19-14 victory over England in their opening game in San Francisco on Friday night.

Ireland went ahead with a try from Ashleigh Baxter before England recovered to score through Emily Scarratt down the right flank.

Following a successful conversion, England took a 7-5 lead into half-time.

However, it was Ireland who stepped things up following the restart, as Amee-Leigh Murphy-Crowe ran in two tries within the space of as many minutes to move her side 19-7 ahead.

Brown helped England rally late on with a quick ball recycled and Alex Matthews was picked out in space to cross over.

England were able to reduce the deficit to five points following another successful conversion, but – with less than a minute left – Ireland saw out the victory.

Ireland will progress to a quarter-final against New Zealand, England must now regroup to tackle Mexico, who are making their debut in the World Cup Sevens competition.

The Ireland men’s side secured a last-play victory over Chile when Jimmy O’Brien scored to secure a 17-12 win and a round of 16 meeting with South Africa.