Rugby’s wild geese: the Irish in England and France 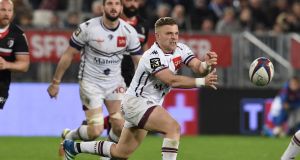 The annual migration of Irish rugby’s wild geese to England and France continues but perhaps at a slower rate, while this summer, a quartet may be repatriated, from the French Top 14 Championship.

Munster have signed Chris Farrell (Grenoble) and James Hart (Racing 92), Denis Coulson (Grenoble) has been linked with a move to Connacht, while Sean Dougall (Pau) has been attracting the interest of Ulster.

Ian Madigan swaps Bordeaux-Begles for Bristol while James Coughlan will retire as a player at Pau to take up a position in helping to run the academy at the Top 14 club. In England, Kerry man JJ Hanrahan returns to his native province after a playing hiatus with the Northampton Saints.

The flow in the opposite direction continues, more so though at English Championship rather than Aviva Premiership level and ditto in France where there will be a greater cast of Irish players to be found in ProD2 than in the Top 14.

A significant change in the contract terms at Ireland’s four provincial academies from the old three-year deals to the new one-year, renewable, agreements makes for a more rigorous process in progression terms. The most obvious side effect is a dip in numbers that will graduate to development or senior contracts. For those looking to maintain a desire for a career in professional rugby the panorama changes and the focus switches further afield.

There is scope but a change in the parameters of transfers in both the English Aviva Premiership and the French Top 14 have made it slightly more difficult.

Niall Woods, former Ireland international, chief executive of Irupa and now managing director of Navy Blue, sports management and agents, has numerous clients in France and England and therefore perfectly placed to offer an overview on the process.

He explains that it’s easier to place Irish players in England rather than France, with the language issue, a consideration, but not always the primary one. In certain positions French clubs prefer Islanders (Tonga, Samoa and Fiji), back three and backrow being the most obvious examples. They must also have 13 qualified French players.

In England each club, both Premiership and Championship, gets subsidised in funding by the (English) RFU, the more English qualified players (EQP) they have on their books.

“A player who’s earning £50,000, if he is English qualified, it might only cost the club £40,000 because of the funding mechanism they are getting from the RFU, whereas an Irish or a Welsh player would cost them a the full £50,000,” explains Woods.

“I would have a number of players who are Irish but also English-qualified through parents and grandparents born in England or have played in England for three years, where they become English eligible on the residency rule.

“Peter Lydon, both his parents were born in England. Jerry Sexton, Johnny’s younger brother, his grandmother was born in England, so he’s English- as well as Irish-qualified. It makes them more attractive than a pure Irish player. Tadgh McElroy, the Ireland Under-20s hooker, is English-qualified.”

A player’s salary is dictated by a number of factors, age, experience, representative honours and the position he plays. Some of those have a greater leverage the higher the level. If he’s EQP, that adds to the attraction.

An English club generally likes Irish players because they work hard, settle in quickly 99.9 per cent of the time and will be good for the playing environment

A player who is second or third choice at provincial level in Ireland could be earning about €40,000, depending on a number of factors, with a comparable salary in England about £55,000 (€64,000). The Irish-based player gets win bonuses and match fees that could boost his income by almost €10,000.

In England the salary cap means that only in very clearly delineated circumstances could a player potentially get match fees or win bonuses, described as small incentives for academy players or those who are second or third choice in a position.

The days of the car and the apartment thrown in to augment the basic salary are gone because they are considered benefit in kind and count towards a player’s salary.

The Ireland schools system and academies carry a huge cachet in England so a 22-year-old player, who has come through that pathway, playing underage internationals to boot, is highly regarded.

“An English club generally likes Irish players because they work hard, settle in quickly 99.9 per cent of the time and will be good for the (playing) environment,” says Woods.

At that stage in a career the difference in salary is negligible in most cases but going to England provides greater opportunity to play and more often than not, that is a primary driver.

Many young Irish professionals end up in the English Championship where the financial reward varies sharply.

“There are not too many of those contracts in the Championship. You would be talking about a very experienced player or a goal-kicker. If you are on £20,000 in Doncaster you can survive but if you are on £35,000 in London you are going to struggle because of the cost of living.”

It remains a route to the Premiership. Woods cites an example.

“Bedford would be twinned with Saracens. Mark Flanagan (from Mullingar) was in France for a year. He’s English qualified.

“He moved to Bedford, was probably their standout player for the season, and was signed by Saracens for two years. If you play well in the Championship it is a very good opportunity but you have to be prepared for a drop in standard and facilities by and large where some guys are full-time some are part-time.”

“They pay well generally but you play a lot more games and you have to be prepared for that. The after-tax money is a hell of a lot better in France than it is here or in the UK,” explains Woods.

“You need to factor it in to how many more games you are going to play to how much more money it’ll be worth to you.

“If you are married and then have kids you keep paying less tax for every child. You could be paying 10 or 15 per cent as opposed to 52 per cent here. You could go on the same salary but get a truckload more for your euros. The cost of living Dublin to Pau is drastically different.

“Generally in France they will give you an accommodation allowance and a car; that’s the Top 14, you might not get that in ProD2.”

There has always been a well-trodden pathway from Ireland to England and France and that shows no signs of abating particularly with the number of players emerging from academies and only four professional outlets domestically.

Harlequins: Niall Saunders (out of rugby through illness has asked, successfully, to be released by Harlequins), Charlie Mulchrone.