Munster play Saracens at the Aviva on Saturday, on Sunday Leinster travel to Lyon 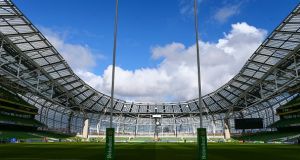 As expected Munster will host Saracens in the Aviva Stadium on Saturday, April 22nd, and Leinster will face Clermont Auvergne in Lyon the following day after tournament organisers confirmed the European Champions Cup semi-finals dates and kick-off times.

The Munster-Saracens game will kick-off at 3.15 in the Aviva Stadium, and as the last English team standing in the competition so BT Sport will televise this first semi-final. The Clermont-Leinster semi-final at the Matmut Stadium de Gerland will kick-off at 4pm local time, 3pm Irish, and will be televised by Sky Sports.

Munster lead Saracens 7-2 in their European head-to-head record, including an 18-16 semi-final win in 2008 at the Ricoh Arena in Coventry, en route to their second crown, although Saracens have won two of the sides’ last three meetings, the most recent being a 33-10 win at Allianz Park two seasons ago.

Leinster lead their head-to-head with Clermont by 5-3, and on the one previous occasion that the two sides met in the last four, Leinster emerged victorious 19-15 at Stade Chaban-Delmas in Bordeaux in 2012.

Most recently however, Clermont completed a double over Leinster in the pool stages four seasons ago.