Provinces will be underdogs against Saracens and Clermont, but at least they’re back 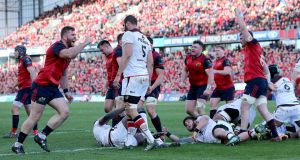 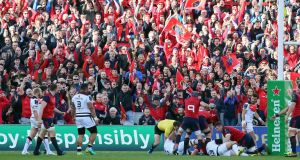 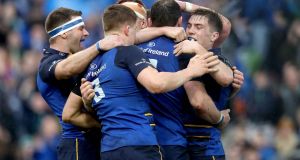 The cream riseth to the top, and all that. In time-honoured fashion, it gets harder now, and the Irish provinces will both be underdogs when Munster host the European Champions Cup holders Saracens in one semi-final and Leinster take the trek to Lyon to face Clermont in the other. But at least they’re back, thereby providing Ireland with two semi-finalists for the first time in five seasons.

After last year’s no-show in the quarter-finals of this competition, it would appear that rumours of the Irish provinces’ demise at this level were indeed premature.

Tournament organisers will probably confirm the respective dates and kick-off times of the semi-finals today but the likelihood is that Munster will play Saracens on Saturday, April 22nd at the Aviva Stadium, with Clermont hosting Leinster the following day at the Matmut Stadium de Gerland in Lyon, which also happens to be the first round of the French presidential elections.

More than 77,000 supporters attended Saturday’s respective quarter-finals in Ireland, which was almost 10,000 more than the combined tally for last year’s four ties at the same juncture, and the capacities of 50,000 at the Aviva Stadium and 30,000-plus in the Stadium de Gerland (which can be increased to almost 40,000) will certainly reflect “home country advantage”.

Munster head coach Rassie Erasmus and players had expressed an understandable preference for a “home country” semi-final against Saracens in Dublin rather than one in Edinburgh against Glasgow, although the scale of Saracens’ 38-13 win at the Allianz Park underlined the greater task now facing them.

The Thomond Park factor was a significant help for Munster during Saturday’s 46-16 win over Toulouse.

“The crowd got behind us and understood that we were under pressure,” said Erasmus. “The players felt it, and the guys managed to lift their game a little bit. It was really, really amazing to be a part of this.”

As to whether the Munster supporters can make the Aviva atmosphere akin to Thomond Park, Erasmus recalled Munster’s defeat there to Leinster, and noted: “In my last game at the Aviva I was sitting in the coaches’ box and it was soundproof. It was tough to enjoy that game. Obviously, we also lost, so it wasn’t easy to enjoy anyway.”

“I would rather we play anywhere in Ireland than going away,” he added in advance of Sunday’s remaining quarter-finals. “I’m not sure what the vibe would be there [at a semi-final in the Aviva]. I can’t talk out of experience, but better in Ireland than in any place else.”

His wishes having been granted, given Sunday’s Allianz Park expanded capacity of 15,000 was a club record, it seems reasonable to assume that the Red Army will make the ground a sea of red.

The tournament organisers have ascertained the initial needs of the four semi-finalists, and Munster have put in a request of 35,000 tickets and Saracens for 2,500. Clermont, who filled the Stade Marcel Michelin to its 18,873 capacity for their impressive 29-9 win over Toulon, have requested 22,000 tickets and Leinster 3,000, a figure which may well rise depending on demand.

Erasmus expressed confidence that Conor Murray (shoulder), Peter O’Mahony (thigh), CJ Stander (ankle) and Keith Earls (back), should all be fit for the semi-finals three weeks hence, whatever about Munster’s intervening Pro12 games away to Glasgow and at home to Ulster.

A clutch of Saracens will be returning to the Aviva Stadium five weeks after England’s Grand Slam ambitions were ended by Ireland on the final day of the Six Nations.

Looking ahead to this prospect – along with teammates Maro Itoje, Billy Vunipola, Mako Vunipola and Jamie George – Sunday’s man of the match at Allianz Park, Owen Farrell, said: “We’ve been in some big games now for a few years. There’s no bigger than going over there to play Munster. Munster are brilliant at applying pressure, probably similar to ourselves. It’s going to be probably a cracking game and one that everyone here will get excited about.”

Looking ahead to their semi-final with Leinster, the Clermont full-back Nick Abendanon said: “I watched that Leinster game yesterday and they’re a fantastic outfit; real strong in attack and aggressive in defence, so it’s going to be a huge task for us to play against such a good side as Leinster, but it’s in France, it’s in Lyon, which is just down the road for us, which probably gives us a bit of an upper hand.

“With semi-final rugby, it’s going to be tight as always but we’re definitely looking forward to it. If we get the Michelin faithful coming down the road to Lyon and being as loud as they were today, then it’s going to be a great game.”

Both Munster and Leinster have had some epic Euro meetings with Saracens and Clermont. Munster won their first four meetings with Saracens, beginning with epic one-point pool wins in their 1999-2000 run to their first final, and in the quarter-final en route to regaining the Heineken Cup in 2008, but Saracens have won two of the last three, the latest being a 33-10 win at Allianz Park two seasons ago.

Home and away double

Similarly, Leinster won five of their first six meetings with Clermont, including a quarter-final win in 2010 and a semi-final win in Bordeaux in 2012, before Clermont completed a home and away double over the then back-to-back champions in the 2012-13 pool stages.

Saracens having won a European Cup-Premiership double last season, they remain favourites of the remaining quartet, with Clermont and Munster 5/2 joint second favourites and Leinster the outsiders at 9/2. But Paddy Power makes Saracens only one-point favourites at the Aviva Stadium, while Leinster are four-point underdogs going to Lyon.