Cool Joey Carbery taking it all in his stride

‘I feel we prepared really well this week. We were really sharp in training,’ Carbery said 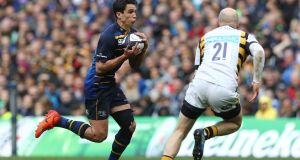 The modern blueprint. On 32 minutes Joey Carbery and Johnny Sexton play a little tiki-taka in their own territory. The exchange carries Carbery over half way, where he seeks to skip between two Wasps forwards.

“Play on, play on,” says Nigel Owens after flanker Thomas Young flips the 21 -year-old on his head.

Carbery arises to slot into flyhalf where he inches Sean O’Brien then Robbie Henshaw over the gainline. All the while Sexton is patiently waiting as first receiver on the short side. Just in case.

“I don’t try and get in front of him or anything but if he’s in the ruck I’ll just jump in,” said Carbery.

Sexton tends to get stuck in the odd ruck.

“It’s good being able to tell the forwards where to go as well.”

This was a chink of light, a momentary glimpse of the assassin’s intent burning brightly in this young maestro.

Luke McGrath puts a box kick into the usually reliable hands of Willie Le Roux. The Springbok captain calls a mark before punting 60 metres down field where Carbery catches and glides into enemy territory once again, drawing Kurley Beale before putting Fergus McFadden up the right touchline.

When McFadden offloads out of the tackle, Carbery is there to draw Le Roux yet instantly free Jack Conan. The powerful number eight gallops away from Joe Launchbury for a wonderful try.

“I don’t think Leinster were weakened too much by them [Jamie Healsip and Rob Kearney] not playing,” said Wasps coach Dai Young.

While the Leinster pack mobbed Conan, Carbery was already back over the halfway line, trotting towards the water bottles to where the attack had begun.

“Just trying not to get hit and get the ball to the bigger man,” was his unfazed summation of what had occurred.

Carbery, daggers of raven black hair protruding from his skull, sticks to the script. Off the pitch that’s how he is. On the field he’s as free-wheeling a player as Leinster has ever nurtured onto the main stage.

Maybe he is using Danny Cipriani as a cautionary tale. The Wasps and former England star in the making was withdraw, an utterly busted flush, after 54 minutes of incessant targeting by Conan and others.

Carbery seems different. Grounded. What about playing in the faces of Beale and Le Roux – the Wallaby and Springbok fullbacks – and you, Joey, an AIL outhalf for Clontarf on this same surface only last May (when he also torched the place)?

“I feel we prepared really well this week. We were really sharp in training. I think that came through in the game.”

You could feel this performance simmering?

“Yeah, we were really, really sharp this week.”

Sharper than usual? “Eh, we are always pretty sharp to be honest.”

The media interaction, unfortunately for us, is a box that gets ticked without genuine opinion. But who cares. For all his brilliant contributions in tearing open the Premiership leaders – also see the cut out pass for Isa Nacewa’s try – there was a glaring error that led directly to Wasps creeping back into this quarter-final on 52 minutes.

Carbery was exposed behind the gainline because he believes he can beat any man in any situation. It’s a confidence Leo Cullen doesn’t want to touch.

“All the time we try to get a balance but you don’t want to knock too much out of them,” said his coach.

When snared in his own territory by Joe Simpson, the Wasps pack trampled overhead before the ball was shovelled wide for the electric Christian Wade to grubber and sprint away from Sean O’Brien and Luke McGrath.

“You got to just move on because if you let it affect you the rest of your performance is going to go down the . . . It’s not going to go well.”

The swanny, Joey, you can say it. There is a razor sharp personality brimming beneath the surface. We know this from the way he plays what appears in front of him, trusting that Kiwi upbringing, that innate desire to create.

Later he uttered “shit” before almost apologising. Yet it seemed like the correct word for the sentence. He’s allowed to curse. Especially after Ashley Johnson’s cheap shot on 55 minutes.

“Rugby is a very physical game,” he replies. “Everyone is going to get hits. Just try to avoid . . .”

Johnson was like a wardrobe landing on you, how do you avoid it?

What also happened was Devin Toner stole the resulting lineout from Joe Launchbury. All round, heads up rugby at its finest and Wasps torn apart.