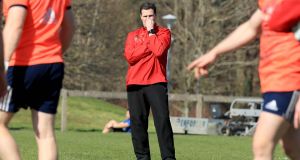 Munster head coach Rassie Erasmus: “It’s really speculation and when something is really definite, I will tell you guys.” Photograph: Donall Farmer/Inpho

Munster director of coaching Rassie Erasmus has dismissed as speculation fresh media reports that he is to return to South Africa on a four-year deal. The reports suggest that defence coach Jacques Nienaber, who arrived with him from South Africa, may be poised to take over at Munster during the summer.

Nienaber, a former Springbok defence coach, is as highly regarded as Erasmus among the Munster players and management. The possibility of him remaining in Ireland could become part of a deal to allow Erasmus to leave after just one year into a three-season term.

However, while Erasmus again said it was all speculation, there was little comfort for Munster fans to be found at UL yesterday morning. Erasmus repeated his stance from last week that nothing had been arranged, while Munster chief executive Garrett Fitzgerald, who was in the building for the official opening of the province’s high-performance training centre, was said to be too busy to meet the media for a short interview which might clear up the matter.

Inevitably, Munster fans looking for reassurances will be disappointed, particularly as the reports have resurfaced just days after their side returned to Europe’s top table with that stunning Champions Cup win over Toulouse which now sets them up for a tilt at holders Saracens at the Aviva Stadium.

Erasmus said it was vital that his own position did not become an issue as they prepare for that match as well as their drive for glory in the Pro12.

“It’s really speculation and when something is really definite, I will tell you guys,” he said, when asked if there were any reassurances he could give to Munster fans that he would be there next season.

“South Africa is close to my heart and I talk to them daily. There is really constant conversation going on but all the things in the media are speculation. Some things are said that are really not true.

“I’ve also got an obligation not to make me something in the middle of our season . . . we’re playing so many important games over the next few weeks. Even last week, people were asking me if it was a distraction. It’s not something internally that we have talked about because it is not an issue at this stage.”

On the injury front, CJ Stander is awaiting the results of a scan on an ankle injury, while Erasmus said that captain Peter O’Mahony is recovering from a dead leg, Keith Earls was also making good progress from a back issue, while Ian Keatley is expected to return to training this week.

Erasmus said he would give Conor Murray every chance to be available for Saturday’s clash with Glasgow Warriors after the Ireland scrumhalf was a late withdrawal from the Toulouse game.

“Until the captain’s run we really thought he might pull through. He is a really important part of our team, and Duncan [Williams] has clocked up a lot of minutes and contact this season, so we will wait this week. It would be great to get Conor out there and we will give him until the last minute to see can he get through this week.”

Erasmus, after watching Saracens overcome Glasgow Warriors to set up a semi-final clash in the Aviva Stadium in three weeks, said he was under no illusion about the task which faces his men against the champions.

“Composure, ability to handle the big stage, a winning culture, world-class players, something you would expect from double champions in Europe and the Premiership . . . obviously well-established and we will be going in there against a team that this wouldn’t be something new to them,” he said.

“They have great players and great coaches but our biggest challenge will be to try and match their experience in situations like this. You can never just make that up and you must find ways through it.

“Maybe we are adapting quicker than we thought we would to the way we want to play as a group and implementing that but you can’t catch up on six or seven years just like that. So I realise they’ll have the edge on us in experience but we’re playing in Ireland and that will even out things.”