Gerry Thornley: Irish are back, but they never really went away 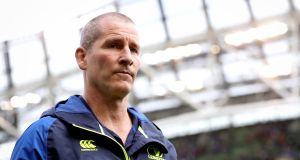 Stuart Lancaster has a proven track record in helping to develop young players, and he has clearly helped develop Leinster’s attacking and defensive games as well.Photograph: Ryan Byrne/Inpho

Perhaps we shouldn’t get carried away. Last season, the absence of any Celtic sides and the presence of five English sides in an all Anglo-French quarter-final line-up, not to mention three semi-finalists and the winners, was seen as heralding a new era of Premiership supremacy in European rugby.

The all-conquering success of English team itself, allied to the English clubs’ increased, television-fuelled, financial clout, only augmented the feeling.

Recall, however, that at the end of the 2009-10 season, after Toulouse and Biarritz had beaten Munster and Leinster in the semi-finals before Toulouse won the all-French decider in Paris, good judges saw this as the beginning of an era of French hegemony. The following season, Leinster beat Northampton in the final, and a year later they outplayed Ulster in an all-Irish final at Twickenham.

Admittedly, two of Toulon’s ensuing three-in-a-row featured all-French finals with Clermont but the point being that any given season is too much of a snapshot to draw definitive conclusions.

What the weekend re-affirmed more than anything is the increasing importance of securing home advantage in the quarter-finals. For the second year in succession all four games were won by the home team.

The last time all home clubs triumphed in the quarter-finals in back-to-back seasons was in 2000 and 2001.But not just that, they all romped home, so to speak. Whereas last season there were two one-score games as Wasps beat Exeter 25-24 and Racing edged out Toulon 19-16, the average winning margin over the weekend’s four ties was over 21 points.

So the presence of two provinces in the semi-final stages for the first time since 2012 (when Leinster and Ulster both progressed) shouldn’t necessarily be seen as hailing a new era of Irish dominance.

Looking ahead, history demonstrates that playing at home is not quite so significant when it comes to the semi-finals, perhaps because there is a greater preponderance of ties with “home country” advantage as well as more of a levelling out in quality.

Whereas the winning ratio of home teams in the quarter-finals has now risen to over 77 per cent, over the course of the 42 semi-finals heretofore, 28 or 66 per cent of the ties have seen the “home” team come through. Admittedly, those figures have been distorted slightly by the two Munster-Leinster semi-finals of 2006 and 2009 at Lansdowne Road and Croke Park when the “away” side progressed. Since then, it’s also worth noting, 11 of the 14 semi-finals have been won by the sides with “home” advantage, which equates to 78 per cent.

Indeed, Leinster and Munster have been on the receiving end of this trend as well. Munster lost their 2013 semi-final against Clermont in Montpelier and a year later to Toulon in Marseille, as did Leinster to the same opponents in the same ground a year later after extra time.

All of which shows that it is possible and that the Irish have remained competitive in Europe save for last season’s blip. And perhaps now, more than then, it can indeed be seen as a blip.

Assuredly the demands of the World Cup were a huge drain on their respective resources, and the failure of the Ospreys and Glasgow – bulk suppliers to Wales and Scotland – to mount strong campaigns in Europe underlines that theory, especially when also set against their progress to the quarter-finals of the Champions and Challenge Cups this season.

Most of all, though, Leinster and Munster are virtually unrecognisable compared to last season. The Leinster team which hosted Wasps at the Aviva Stadium on Saturday contained only five of the starting team which suffered a record 33-6 home defeat to the same opposition at the RDS in the opening round last season.

Apart from Johnny Sexton and Isa Nacewa, their remaining backs in the starting line-up are 24 or younger. No less than the newly arrived Robbie Henshaw, mature beyond his 23 years, Garry Ringrose, Adam Byrne and Joey Carbery are effectively new players, and their footwork and elusive running has given a new dimension to Leinster’s attacking game.

The same is true for three of their starting pack. With the conveyor belt of talent coming through their underage system, Leinster’s future looks bright.

With the changed personnel on the pitch has, of course, come the arrival of Stuart Lancaster. The former England head coach has a proven track record in helping to develop young players, and he has clearly helped develop Leinster’s attacking and defensive games as well. Leo Cullen, Girvan Dempsey and John Fogarty have evidently learned from him and grown in the job as well. That they’re all staying on is good news for the organisation.

Leinster’s defensive line speed, tackle execution and work at the breakdown went some way to nullifying Wasps’ abundant threats, but the manner in which Leinster have been liberated this season has been little short of a revolution. Aside from their strike moves and maintaining their shape in attack, Leinster are also off-loading and counter-attacking.

Incredibly, they have already scored 114 tries in 25 competitive games this season, compared to 60 in 30 games last season. With Lancaster and the remainder of the coaching ticket also set to stay on, Leinster look well placed to continue dining at Europe’s top table.

By contrast, the core of the Munster team are at, or are reaching, their prime. Ten of their starting team against Toulouse are aged between 26 and 29. Rassie Erasmus has brought real self-belief and a well structured game plan in which all know their roles, and their culture has readily bought into the more aggressive defensive ethos instilled by Jacques Nienaber. After last season’s ravages, key men, such as Peter O’Mahony and Tyler Bleyendaal, are also healthy.

Given the momentum they have generated this season, and especially given the doubts around the future of Erasmus and the apparent departure of Donnacha Ryan, they perhaps look more primed for the here and now.