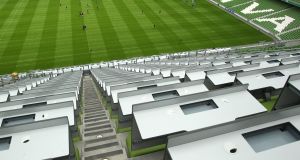 On Friday night, we went to the pub. Booked ahead a day in advance, asked for a spot with a view of the TV, sat down, ordered a pint and a burger and some chicken wings and finally, after six months, grabbed a slice of normal for ourselves.

Sat and watched Barcelona’s end-of-days show while over in another corner, the closing frames of the snooker semi-final between O’Sullivan and Selby were playing out. Through it all, text updates were coming in from home on how Eric Donovan was getting on.

Sport has been back a while not but it was really only last week that it hit home exactly what had been missing since the tap got turned off. All along, we’d presumed it was just sport, the simple act, the games, sets and matches of it all. And yeah, it was, but only up to a point. Truth is, the thing that was really missing was sport that matters.

This isn’t necessarily the well-duh revelation it might appear. The end of the Premier League was grand as a bit of wallpaper and in fact probably better than might have been expected in terms of quality and storylines. But since the big prize had already been all but decided, it was mostly an exercise in fixture-filling before long.

The same has been true of the GAA club championships as they’ve begun to be played out over the weeks. Every county has made it their business to give players games first and foremost and so there’s been a lot of round-robins and group games to plough through. It was only last weekend when the favourites St Martins got bounced out of the Wexford hurling quarter-finals that it suddenly felt like there was real jeopardy involved. And even then, club shocks make for local tremors.

Go all the way around the sporting world and it was the same story. Formula One went from their usual 21-race season in February to promising a 15-to-18 race season at the end of April to the situation currently where the schedule has 13 races. All of them in Europe and three in Italy - the first time in almost 40 years that a single country has put on three Grand Prix races in the one season.

The teams involved have made no bones about it - they need races to happen for their financial survival. The results are more or less secondary.

In the US, the baseball and basketball leagues are playing out every night, the latter with notably more success than the former. The NBA have been able to put on a show of sorts, rigging up digital fan walls courtside, cranking up the music and keeping the camera angles tight. You can’t do that in baseball and MLB games have never looked slower or felt like they’ve taken longer.

But even the NBA, with its bubble and its nightly fix of games, even it has been mainly marking time until the play-offs, which start this week. It’s been all very well to flick on a game here and there but with the best will in the world, when the real-life news is so grim, there’s no part of you that wants to get deep in the weeds of whether the Lakers or the Bucks will make a run to the title.

Sport can still transport us and allow us to leave all the bad stuff behind for an hour or two. But what the past week has really brought home is that for this to happen right now, the stakes have to be high. The Sunday night of golf’s PGA Championship was elemental stuff. Six players were tied for the lead on two different occasions, a couple of hours apart. The course was a player in itself, the drama didn’t let up.

It was getting on for two in the morning by the time Collin Morikawa saw it out. But because it mattered and because the twists and turns in it made it feel like it mattered more with every shot, it kept plenty who had banked on an early night up well past their bedtime.

There have been some decent finishes in the PGA Tour since it came back two months ago. But it wasn’t keeping anyone beyond golf nerds and stoners up past midnight.

There’s a lesson in here for rugby, which takes its first steps back to normality in this country next weekend. If you were worried that it wouldn’t feel vital or crucial, the experience of the different sports around the globe so far can show the way forward. Rugby has to make people care about these games. If it feels like they’re just being run off for the sake of it, then interest will wane very quickly.

Week after week of games being played just to honour television contracts will get pretty old pretty sharpish.

In the beginning, that’s going to be unavoidable to a certain extent with the last knockings of the Pro-14 season. But by the time the big-beast quarter-finals of the Champions Cup come around next month, the sport needs to have built up a bit of momentum for itself.

How it does that is its own business but it does seem a bit self-defeating that the current solution to the 200-person cap at venues is to keep the written press out of the Aviva. These games are going to come across as slightly artificial anyway, all the more so if people are writing about them from their couch.

However they go about it, the route to normality is clear. Make the games matter. Everything else will follow.

3 'Once Brothers' a sad tale not easily forgotten