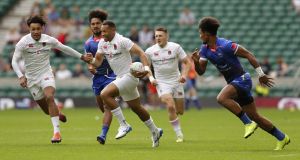 England’s Rugby Football Union (RFU) has ditched its sevens programme as it struggles to cope with the financial impact of the Covid-19 pandemic, the Telegraph has reported.

The RFU told players this week that their contracts would not be renewed at the end of the month, the report said, a decision that is likely to harm Britain’s medal prospects in the event at the rescheduled Tokyo Olympics next year.

The RFU last month projected a short-term revenue loss of £107 million (€118m) due to the closure of Twickenham Stadium and was planning to make 139 positions redundant.

Sevens does not receive funding from UK Sport, the organisation responsible for investing in Olympic and Paralympic sports in the country, and the RFU said it could no longer support the England sevens teams in the current climate.

“We have approached UK Sport for funding and are exploring the option for a Team GB sevens team,” an RFU spokesperson told the Telegraph.

“We are also in dialogue with World Rugby about the programme for the World Sevens Series and when games are likely to be played. With no current support in funding we are not in a position to sustain the team in its current format.”

Britain’s men won silver at the Rio Olympics in 2016 while the women finished fourth.

Dan Norton, the all-time leading try-scorer in sevens, told the Telegraph: “The more I think about it, the more frustrated I get.

“I have been fortunate enough to give 10 years and I do know that professional sport is pretty ruthless.”

1 Gerry Thornley: South African sides would be a welcome addition to Pro14
2 The Offload: Springbok heavyweights heading for Pro14
3 Stuart Lancaster and Leinster ready to roll again at the RDS
4 Liverpool maintain perfect start with win over Arsenal
5 Ballymun’s Dublin title one to savour for James McCarthy
Real news has value SUBSCRIBE