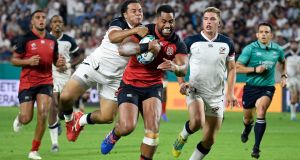 The hardest yards at the Rugby World Cup come in midweek, when the big dogs bark and the yappy ones get chomped. How do you cover a game where everyone knows the result ahead of time? How do you make it feel like the pinnacle of the sport when it clearly isn’t?

The TV companies covering the tournament are like the kids who get caught smoking by their parents and are made to finish the whole packet as a punishment. If they could get away with a few here and there on the weekends, they’d be delighted with themselves. But when you’re made to hunker down and make your way through each of them, one by one by one, the attraction doesn’t be long wearing thin.

(Readers feeling the need to object here at the needless conflation of smoking and rugby should spare themselves the price of a stamp and fight the urge to write in. It has been exaggerated for effect, in the full knowledge that the comparison barely holds. Say what you like about an activity that damages your health, drains your pocket and isn’t half as sexy as it makes itself out to be, at least rugby doesn’t give you cancer.)

To England v USA, then. Thursday morning, coming down. The sort of game where you’d need to be hungover – or indeed actually drinking – to justify giving over the couple of hours. Or, if you were really destitute, you could claim to have to write a Sport on TV column about it. People’s pity can be a warm bath in trying times.

On Eir, Tommy Bowe, Louise Galvin and Peter Stringer did their level best with what turned into a predictable 45-7 hammering. Tommy’s enthusiasm for life could survive a nuclear blast. You could transplant him to Westminster this week and he’d still have his big smiley head on him, asking if anyone else thought that Boris Johnson was a grand lad at the back of it all.

The Eir coverage is perfectly decent meat-and-two-veg stuff on the whole. When Bowe opened with a question about there being any chance a shock was on the cards, he got admirably short shrift from Galvin and Stringer. There was no flamming it up, no making it out to be more than it was. Good for them.

Something needs to be done about the music though. They have a particular sting that sends you off to the ads which, if the Fiachras and Fachtnas were really earning their commission, would be hawking nothing but headache tablets. It sounds like builders are clearing out the second floor of an old music hall and hurling violin bows into a skip down in the street. If you had it in a movie, it could only rationally use it to soundtrack a violent stabbing scene.

Over on ITV, it was 2003, just like always. It’s like that time on The Sopranos when Chrissy has a near-death experience and is convinced he crossed over to the other side. “That’s our hell,” he tells Tony and Paulie. “An Irish bar where it’s St Patrick’s Day every day forever.”

And so it goes on ITV, where the line-up was Clive Woodward, Jonny Wilkinson and Lawrence Dallaglio. It wasn’t long before they were invoking Matt Dawson and Will Greenwood too. One presumes Martin Johnson and Neil Back will be along for the knock-out stages.

The game was what it was. George Ford skated in for the first try after five minutes, England mauled over for another pair before the break. The Yanks couldn’t get out of their half until right at the end when the game had broken up a bit.

Speaking of broken up, Owen Farrell’s jaw came mighty close to landing in Row Z thanks to an unconscionable tackle by USA flanker John Quill. After seeing the first red card of the tournament, Quill took a shelling from all sides on all channels.

Even Tommy Bowe had a swing, putting it to Stringer that the man from Youghal could have no complaints. “Well, tough as it is to be hard on a fellow Corkman . . . ” began Stringer, before not finding it hard at all and giving Quill both barrels.

At least it was a talking point. On a long morning, it was a lonely soldier in that regard.