No matter how Rugby World Cup turns out, Joe Schmidt’s legacy is secure

Tipping Point: We have up to six weeks left with best coach Irish rugby – arguably Irish sport – has had 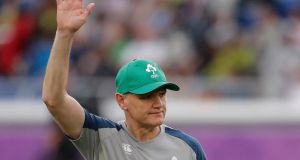 Joe Schmidt isn’t exactly a how-do-you-like-me-now kind of dude. We know this. We like this. Part of the reason the likes of Warren Gatland and Eddie Jones tend to get up the noses of the Irish public the odd time we cross paths with them is their evident regard for their own genius. Schmidt can dissemble with the best of them but when he said last week that he has never been a particularly confident person, it didn’t sound like the poor mouth being put on.

Still, if ever he could feel entitled to puff the chest out and barrel into a press conference throwing v-signs and offering lads outside, yesterday in Yokohama was surely the time. Ireland made a Scotland side that was talking about winning the World Cup last week look like they had been given the wrong date for the start of the tournament. Somewhere, the ghost of Ally MacLeod had his head in his hands.

All judgments have to be made in that context, naturally enough. Japan suddenly look the second best team in the group and whether they are or they aren’t, they’re certainly the best side Ireland will face before the quarter-finals. Six days prep as against their eight, a few HIAs to get sorted out, Johnny Sexton not taking kicks at goal – Schmidt will have found plenty of bugaboos to keep him awake overnight.

Every once in a while these days, you have to stop yourself and realise just how little time we have left with Schmidt. Could be a month, won’t be more than a month and a half. Best-case scenario, we have six weeks left with the best coach Irish rugby – arguably Irish sport – has ever had. When he leaves the job, regardless of what happens in the coming weeks, he’ll walk out the door with plenty in the credit side of the ledger.

That ought to be clear to everyone, right? A quarter-final defeat to South Africa, if it all pans out that way, surely won’t take too much of the shine of the Schmidt era. Obviously, if Ireland win that one and make a semi-final, then he will have been the one to break ground that was forever untroubled before and he will walk off into the sunset a hero. But shouldn’t that be the case anyway?

The question is only worth asking because you could feel the thrum and murmur of general discontent building through the year. In and of itself, this was no big surprise – Ireland had a rotten Six Nations and by the time the warm-up game in Twickenham ended in a hiding, the only natural reaction was to go into full-on fret mode. It would have looked like nobody was paying attention otherwise.

What was interesting though was how much of the grumbling was aimed at Schmidt in particular. Through the Six Nations, all the casting around for reasons for Ireland’s travails seemed to come back to him in the end. The decision to announce his departure so far ahead of time, making him a lame duck. A gameplan that was so heavily reliant on close contact and set-plays that other teams had come to work it out. A level of control-freakery that had maybe begun to reach its sell-by date.

The old story about Andrew Trimble’s key card was always held up as a sign of Schmidt’s attention to detail. For those who haven’t heard it, at one of Ireland’s first camps in Carton House under Schmidt, the coach found a room key card sitting on a sofa in the team room with nobody sure who owned it.

Picking it up, he went to reception to find out who it belonged to and then went to find Trimble to upbraid him for being so heedless as to leave it lying around. “If you make mistakes off the pitch, you will make mistakes on it. Don’t let it happen again.”

In the early days, that felt like an insightful, half-comic yarn about the sort of standards he wanted Irish players to set for themselves. All these years later, it comes across almost as a type of neurosis, the kind of exacting mindset nobody can keep up for very long without burning themselves out.

Certainly, Schmidt himself looked drained by the end of the spring campaign. He as good as conceded that his reason for leaving the job was that it was eating up too much of him, of his life, of his family’s life. Six years of micromanaging Ireland’s players down to the very last key card looked to have caught up with him.

Even yesterday, even after giving Scotland a tonking in the World Cup opener, even then he looked in his TV interview like someone who had just landed in out of the rain and hadn’t had time to take off his coat before someone told him the boiler was on the blink.

This is a serious business, obviously it is. But you’d hope there is still room in it for some level of joy in his achievements. Yesterday was only the second time Ireland have beaten one of the home nations in a World Cup. Yes, Scotland were cat. But it’s not nothing, either.

Four to six weeks. After that, Schmidt will be gone. It will either be on the back of a quarter-final defeat to South Africa or a glorious run to the business end of the competition.

Either way, he has done the State ample service.