Rugby statistics: Forwards led the way against Scotland in the breakdown and tackle 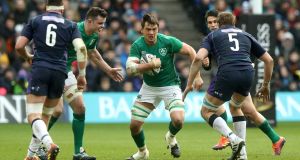 ‘Look, I just need to do my job and I know that my coach and my team have respect for me, and if I do well that I’ll keep on being selected. So that’s what I’m focusing on.”

Those are the words of Quinn Roux in the wake of Ireland’s victory over Scotland at Murrayfield last weekend. He had fully honoured that commitment over the preceding 80 minutes.

Originally omitted from the 38-man Ireland squad for the Six Nations Championship, he was recalled following injuries to Iain Henderson and Tadhg Beirne, taking a place on the bench against England and then following Devin Toner’s injury misfortune, not only starting against the Scots but calling the lineout.

He’s been doing it for Connacht for the past two seasons and last Saturday, Ireland had a 100 per cent success rate from 11 lineouts with James Ryan winning six, Peter O’Mahony (three) and Ultan Dillane (two) on the Irish throw and Ryan and Dillane snaffling one apiece on Scottish ball. It underlines a selfless element on Roux’s part not to call a single throw in his direction.

It’s a theme that runs through his performance in the match, prioritising the team. Perhaps the most nuanced illustration is squirrelled away, camouflaged under the heading “ruck contributions” in the official (AWS) statistics.

While the breakdown is the subject of much amateur forensics to cries of, usually with a note of exasperation, “hands”, “not through the gate”, and “off his feet”, the professional metrics don’t allow for conjecture. Given the nature of Ireland’s victory in Murrayfield the breakdown proved an integral battleground. One bald statistic was that the Scots won three turnovers to none.

High profile moments are easy to recall and celebrate, Jacob Stockdale’s try, polished on the training ground and executed beautifully, or Joey Carbery squeezing between two defenders and seeking out Keith Earls before throwing an exquisite, try-scoring pass, but there is less cachet for the more mundane chore of hitting rucks.

It’s a niche appreciation society whose membership largely consists of team-mates and the coaching cabal. Nevertheless it remains essential if a team is to impose its patterns in attack and conversely slow down opposition ball as they try to realign, especially important given the manner in which the game against Scotland panned out.

Ireland racked up a figure of 387 under the “own ruck arrivals” moniker – it signifies the number of Irish players to contest a ruck in which Ireland had possession – with Roux leading the way on 54, closely followed by his captain, Rory Best (48) and Ryan (41). To put that in context the leading Scot, prop Simon Berghan managed 36 from a total of 279.

Roux was in the first three players to resource Irish rucks on 46 occasions with the 36-year-old Best (41) defying any ageist based conclusions in amassing serious numbers. A third metric is “cleanouts” (154) with the Connacht secondrow leading the way with 25; or 15 per cent of the overall total.

In summation Roux hit more rucks, was there quicker in aggregate terms than any other Irish player and helped to eject more opponents from the breakdown than any of his team-mates.

The graphic also highlights the speed at which Ireland clear ruck ball using the traffic light colours of green (under three seconds), amber (three to six seconds) and red (over six seconds).

By way of comparison, Ireland’s 51 per cent of quick ball was less than Scotland (59 per cent) but racked up better numbers than their hosts in the other two categories. In Best’s case lineout throwing is the most visible part of his game but the statistics show he was a prized contributor at the breakdown.

There was also one other area in which Roux and Best excelled and that was in the tackle made/missed category. They were the only two players in the starting team that boasted a 100 per cent tackle completion rate, with five being the minimum qualifying number – Roux made 12, Best 11.

Ireland number eight Jack Conan’s 19 (two missed) provided the highest figure, followed by Peter O’Mahony 15 (2), Bundee Aki 15 (1) and Roux 12 (0). With Toner ruled out through injury for the remainder of the Six Nations, Henderson touch and go to make the final match against Wales in Cardiff and the fact that Beirne won’t be ready in time for the Italy game, Roux should get another chance to build upon his body of work in the tournament to date.

The Italians try to be physically abrasive in the set piece, maul and breakdown, so for Joe Schmidt’s side to try and rediscover a more attuned flow to the attack – Ireland fullback Rob Kearney had the standout figures from that perspective in a high quality display – it will be predicated on being able to secure quick ruck ball amongst others things. Roux, as the figures have illustrated, did more than any other Irish player in that respect at Murrayfield, his contribution less eye-catching but invaluable nonetheless.