Belvedere power past Newbridge into semi-finals 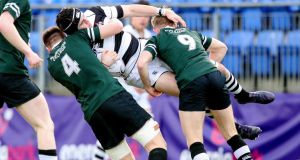 Belvedere took the gilt-edged chances that came their way to score four tries and move past Newbridge into the Leinster Senior Cup semi-finals at Energia Park on Wednesday.

An eagerness to play can be infectious and Belvedere’s intent to generate tempo got them into trouble early on. The positivity of their approach was tested when Newbridge wing Donal Conroy stepped up for an intercept try from halfway and scrumhalf Jack Doyle nailed the extras in the third minute.

This should have given Newbridge the momentum to build on a real confidence booster. But Belvo’ were never likely to go into their shell on the basis of one setback.

It didn’t take them long to respond, Alekseiy Soroka rescuing a lineout to set up a maul that rumbled all the way with hooker Andrew Synnott claiming the try and outhalf Justin Leonard levelling matters in the seventh minute.

It was a high-paced, high-quality game with Newbridge looking for any reason to release their outside backs. In return, Belvedere took a more pragmatic, direct course of action, led by number eight Soroka.

It was appropriate that the forwards should drive the ball up the middle and Soroka apply the finishing touch to the base of the posts, Leonard converting for a 14-7 Belvedere lead in the 24th minute.

The willingness of Newbridge’s back three to come out of the line and make their hits was risky, but rewarding, fullback Sam Cahill and wing David Higgins stopping man, ball and all to prevent further damage.

When Belvo’ centre John Meagher did escape down the right, the support was slow in coming. Eventually, Meagher was taken to deck, Soroka got close enough with a carry and scrumhalf Patrick Lysaght dived for five, Leonard’s conversion taking it out to 21-7 at the interval.

Newbridge were now in a tricky position. They had to push the envelope, move the bigger Belvedere forwards around with the view to creating mismatches or opening up space.

In fairness, that had been their plan all along. They just didn’t have the beef up front to send Belvo’ backwards.

It was then their captain Luke Rigney stepped up to carry them forward without the manpower to turn prime position into five points. They just didn’t quite have the polish to complete their approach work, fullback Sam Cahill held up near the line and their forwards turned away repeatedly by stout resistance.

The penalties mounted for Belvedere as they saw precious little of the ball. That was fine by them as the clock moved on without the Kildare school eating into their advantage.

Outhalf Jack Hannon did flight a ball for Conroy and the space opened up on the left, only for David Higgins to be bundled into touch by Dylan O’Grady.

Belvedere did not venture into Newbridge’s half until the 55th minute when Leonard struck a penalty in what was to be a real body blow.

It went from bad to worse when replacement Conor Kelly crashed to the line for the game’s final try which Leonard converted in the 63rd minute.