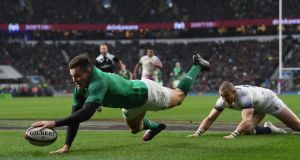 Eddie Jones likes to amuse himself before matches and it generally manifests itself in the form of a verbal barb or two. The pliable and the unwary get hooked, as do those who are hardwired to go from nought to outrage in a nanosecond. When Jones says something that seems pejorative in tone, the only thing to check is that his fishing licence is still in date.

He provides manna for the media; in the land of the bland the pithy one-liner is king. Boom. Boom. There is an occasional misstep but whether he’s being nasty or nice the pantomime villain tends to have a twinkle in his eye. His comments only hold currency to those who value them and are often a distraction tool to redirect the spotlight. Call it the glasshouse effect.

This week England’s defence coach John Mitchell has understudied his boss in the role of agent provocateur. But does he have a point?

Jones was appointed England coach in November, 2015. So using the parameters of the Six Nations championships of 2016, 2017 and 2018 with a view to the respective try tallies of England and Ireland during the tournaments in question, Joe Schmidt’s side comes out on top with a cumulative total of 49 tries to 43.

First to the overview - England won a Grand Slam in 2016, claimed the Six Nations title in 2017 and finished fifth last year. Ireland were third three years ago, second in 2017 (in which they denied an English team a clean sweep on the final weekend) and claimed the Grand Slam at Twickenham last March.

England triumphed in 11 and lost four during that period while Ireland managed 10 wins and one draw with the same number of defeats. In two of the three tournaments Ireland scored more tries over the five matches.

Drilling down a little further provides a bit of context to the bare figures when it comes to try scoring. Of England’s 43 tries, 86 per cent (37) have been scored by backs while the forwards have chipped in with just six (14 per cent).

The breakdown in terms of the pack is that in the past three tournaments, only four English forwards have crossed the whitewash with prop Dan Cole, an unlikely candidate to lead that list with two, alongside Sam Simmonds (2), George Kruis and Billy Vunipola, who will return to the England team for Saturday’s game against Ireland at the Aviva stadium.

No England forward has scored a try from a total of five in the three Six Nations games against Ireland - there were held scoreless in 2017 - from 2016-2018; that honour falls to Anthony Watson, Mike Brown, Elliot Daly (2) and Jonny May.

In an overall context the back three in the England team have weighed in with 19 tries between them, followed by the halfbacks (10), the centres (eight) - in the latter grouping two hat-tricks from Jonathan Joseph and a brace from Ben Te’o both of whom miss Saturday’s game - frontrow (two), secondrow (one) and backrow (three).

Giving England space on the edge or the wider channels is punitive but that’s generally a legacy of a team being pummelled up front and sucked in; a fair percentage of the backs tries were run-ins or against numerically inferior opposition.

Ireland in contrast have a more even spread in the try scoring terms between backs at forwards, a 31-18 split (63 per cent against 37 per cent) to be precise. Irish forwards score three times as many tries as their English counterparts.

In 2016 scrumhalf Conor Murray led the way with three of eight tries from backs while the now retired Jamie Heaslip and his successor as Ireland number eight, CJ Stander managed a brace apiece from a total of seven.

In 2017, Keith Earls and Craig Gilroy crossed for three each to lead the way, with the latter grabbing a hat-trick in Rome as a replacement in what is to date his last cap for Ireland. The backs scored nine with two forwards, Stander (three, also in Rome) and Iain Henderson (two) standing up for the forwards (five) in a cumulative tally of 14.

Ireland boast a better dispersion rate in scoring terms throughout the team and that alone suggests that they are more effective as an attacking entity. Even if Alias Mitchell & Jones don’t agree.