Joey Carbery has kicked on from Castres setback 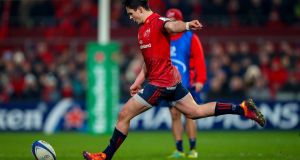 “There was a lot of expectation when he came to Munster, but the way he’s handled himself, he is a special man and a special player; I’m proud to be his coach.”

Those are the words of Munster head coach Johann van Graan, spoken in reference to his outhalf Joey Carbery in the wake of the province’s 9-7 Champions Cup victory over the Exeter Chiefs last weekend. The Irish international kicked three penalties, thereby extending an unblemished sequence from the tee to 20 place-kicks across four matches.

Carbery struggled with his place-kicking in the narrow defeat to Castres Olympique but since then has kicked five from five against Leinster and Connacht respectively, seven from seven in the win over Gloucester at Kingsholm and three from three against the Chiefs.

Those place-kicking statistics don’t convey the full extent of his influence or take into account the fact that he also crossed for three tries in the period under scrutiny, boosting his tally to a highly impressive 65 points in four matches. Munster scored 107 points in those matches, with Carbery accounting for 61 per cent of that total.

Any player who discharges the place-kicking duties knows that performance reviews will have two distinct and to some degree separate areas of evaluation: general play and the bottom line figures with the placed ball.

The 23-year-old produced his least accomplished display in the run of matches in question against the Chiefs, trying to force things a little as part of a general malaise where Munster struggled to find a consistent playing rhythm under fierce pressure from the English visiting side.

In those circumstances it is important that issues in general play don’t bleed into place-kicking and vice-versa. Carbery ensured that they didn’t, landing all three kicks, a brace from outside 40-metres and including the result-defining strike that he gauged beautifully in a capricious wind.

Temperament is a euphemism that covers a multitude in a sporting context, but Carbery possesses a mental strength and belief that can be traced back to his decision to switch from UCD where he understudied Ross Byrne to Clontarf. The two met in an All Ireland semi-final; Carbery took the game by the scruff of the neck as he did in the final victory over Cork Constitution.

He’s aware of the skills he has, but he’s very composed and he’s very honest with himself

The words of Clontarf coach Andy Wood in the aftermath of the Con match carry the same resonance today. “Defensively, whether he stands at 10 or 15, he [Carbery] can make some pretty effective and dominant tackles. He’s a very, very special player.

“He’s aware of the skills he has, but he’s very composed and he’s very honest with himself. A great guy, and the composure he has, instils that confidence across the rest of the players.”

Any upheaval from switching between Leinster and Munster last summer for Carbery might have been lessened significantly by his sharing a house with his former Blackrock schoolmates, fellow Athy man Jeremy Loughman and Conor Oliver, and getting the chance to play regularly at outhalf, something he hadn’t done since his days with Clontarf – a state of affairs that augurs well for Munster and Ireland.

His run of 20 successful place-kicks in a row is evenly split between penalties (10) and conversions (10), with the graphic illustrating where they have taken place on the pitch. A dozen kicks have been inside or on the 22-metre line (it is possible to split hairs with one about whether the kicking tee was touching the line), with one conversion, to a Dan Goggin try in the Connacht match, close to the touchline. It was from the “wrong” side for a right-footed kicker.

He landed two other conversions, in the Gloucester and Leinster matches, from the left touchline. Carbery’s figures include seven successful kicks between the 22-metre and 10-metre lines, and one in the victory over Leinster from a few metres inside the Munster half. They were not all from the car park.

However, the bald figures don’t provide any context in terms of the importance of individual kicks, but, aside from the three against the Exeter Chiefs which proved crucial in terms of the result, there was a brace of penalties in the Leinster match that provided Munster with the impetus on the scoreboard to force the visitors to continue to chase the game.

The more consistent game time he gets at 10, the more he’ll evolve as an outhalf, with the qualities to be an outstanding one in every facet of the game.