Since 2014 on all 10 times Ireland trailed at the interval, they went on to lose the game 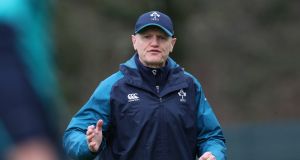 Joe Schmidt: The last time he saw Ireland recover from an interval deficit to record a victory was in the 23-17 victory over the Pumas in Tucumán, Argentina in 2014. Photograph: Billy Stickland/Inpho

Ireland’s 23-17 victory over the Pumas at the Estadio Monumental Jose Fiero in Tucumán, Argentina on Saturday, June 14th, 2014 represents a landmark moment in Irish rugby but it’s not an achievement that will be widely noted or celebrated.

It marks the last time that the Irish rugby team trailed at half-time in a Test match and came back to win, a sequence of 52 games. Joe Schmidt had officially taken over the Ireland head coaching position the previous November and in the first Six Nations (2014) led the national side to championship success winning four out of the five games, including an epic 22-20 victory over France in Paris.

In that game at the Stade de France Ireland also trailed at half-time (13-12) before engineering a stirring second-half performance. Schmidt’s side undertook a two-match tour to Argentina, winning the first Test, and no one could have anticipated that the achievement in the second Test against the Pumas would bear an asterisk to this day.

James Cronin, Rob Herring and Noel Reid made their respective debuts that day while Jonathan Sexton kicked three penalties as Ireland trailed 10-9 at the interval.

Simon Zebo scored a second-half try which Sexton converted before departing injured and his replacement Ian Madigan crossed for a try to which he tagged on the extras. Darren Cave and Fergus McFadden combined at centre while Rhys Ruddock was a standout performer.

In the 52 matches that followed the Argentina match in question, Ireland won 37 (71 per cent) in which they led at half-time and maintained that ascendancy to the final whistle. On all 10 occasions (19 per cent) when losing at half-time, the Irish team has failed to turn that deficit around in the second 40-minutes.

Twice (four per cent) Ireland have been ahead at the interval only be overhauled by their opponents before the finish, the first time in Paris (2016) when a converted try from French fullback Maxime Medard proved the decisive moment from a scoreboard perspective as the home side trailed 9-3.

The other was arguably more painful, the second Test against the Springboks in South Africa that summer, when the Irish team blew a 19-3 first half lead, a tally that included Devin Toner’s first try for Ireland.

The visitors, despite having been reduced to 14 players following CJ Stander’s sending off the previous week in the first Test, won that match and would have become the first of the home nations to win a Test series in South Africa if they could have held on. The Springboks, who had been booed off at half-time, went on to win the second and third Tests.

In four of the 10 matches in which Ireland trailed at half-time and lost, they were more than one score behind; 13 (Scotland), 10 (Argentina, World Cup), nine (England) and eight (New Zealand).

In the other six games they were twice down two points at half-time, twice by three points, once by six and last weekend against England by a margin of seven. The English feature more prominently than any country in that list with three appearances. Eight of those defeats were away from home.

There were three games in the 52 matches in which an Ireland team were level at half-time and twice went on to win; against Australia (2014) at the Aviva Stadium and the Springboks (2016) in the first Test, the sole defeat in the sequence coming in a warm-up match against Wales in Dublin ahead of the 2015 Rugby World Cup.

Ireland under Schmidt have ratcheted up some impressive figures as a 37-2 strike-rate in terms of the win/loss ratio when leading at the interval illustrates while a 0-10 outcome when seeking to overhaul a deficit after 40-minutes is an unwanted statistic.

To generalise, Irish teams in this period have been excellent frontrunners but can struggle when looking to chase a game in the second half. That statement has to be less rigid and linear when parsed against, for example, the victory in Paris last year when Johnny Sexton applied the coup de grace with a drop goal in injury time after 41-phases with his side trailing 13-12.

No team sets out to be losing at half-time and Ireland are no exception, 52-match run or not, but somewhere, sometime soon, it would be opportune to reset the counter to zero and prove that an Irish side trailing at the interval won’t continue to foretell the outcome.