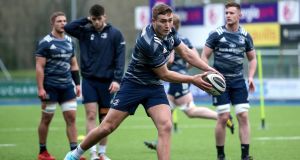 The last time Connacht beat Leinster in Dublin, Steph Nel was their coach, while the future head coaches of both Connacht and Ulster, Eric Elwood and Dan McFarland, were in the visitors’ ranks, as was Leinster’s current incumbent Leo Cullen in the home secondrow.

As an aside, Bertie Ahern was leading an Fianna Fáil/Progressive Democrats government, the dust hadn’t even begun to settle from the Roy Keane/Mick McCarthy set-to in Saipan and Atomic Kitten’s The Tide is High was number one in the Irish charts.

Since Mark McHugh’s long-range, 83rd minute drop goal sealed a 26-23 win at the RDS in September 2002, Connacht have recorded seven wins over Leinster at the Sportsground and also beat them in the 2015-16 final at Murrayfield. But they have lost on 16 successive visits to the capital, including all 12 in the RDS.

In that time, Connacht have never come closer to topping Leinster in Dublin than on their last visit just over a year ago, when they deservedly led 29-12 entering the last dozen minutes. Whereupon tries by Sean Cronin, Dan Leavy and Andrew Porter, in overtime after 41 phases, sealed Leinster’s 33-29 comeback win.

The chances of Connacht coming even remotely that close are reflected in the odds, with Leinster 28-point and 1-50 favourites, and the visitors at 16-1.

Ruddock is one of seven of Leinster’s World Cup contingent who return for this game after a two-week break, along with Jordan Larmour, Garry Ringrose, Luke McGrath, Cronin, Tadhg Furlong and James Ryan, as Cullen makes 14 changes from the side which kicked off their win over Munster. The tackling machine, Will Connors, is the only player retained from the starting line-up in Thomond Park.

The Wallabies international Joe Tomane also returns from injury for his first outing since Leinster’s 42-11 win over Connacht at the Sportsground in early November, while Ciarán Frawley takes over from Ross Byrne at outhalf.

Three members of the Leinster Academy, namely Roman Salanoa, Ryan Baird and Harry Byrne, are on the bench, which also features Cian Kelleher, who played for Connacht in that fixture at the RDS last season.

Similarly, Connacht retain only five of that starting XV, with other notable absentees compared to that night being Jack Carty, Bundee Aki and their injured captain Jarrad Butler. The 20-year-old Roscommon lock Niall Murray makes his full competitive debut for Connacht, having come off the bench in Connacht’s recent Champions Cup win over Gloucester. He will be partnered by Gavin Thornbury, one of five former Leinster men in Connacht’s starting team, who returns from injury for his first game since October.

In Butler’s absence, Caolin Blade again captains the side and partners Conor Fitzgerald, while Denis Buckley and Eoghan Masterson also return, with the latter’s brother Sean, a member of the province’s academy, among their replacements.

“We really challenged them in the corresponding fixture last season,” reflected Connacht head coach Andy Friend, “and the lesson from that game is that to beat them you need to deliver a top class performance over 80 minutes, or they will punish you. That is exactly what we are asking of our boys, a consistent performance over the 80 minutes”.

“I am delighted for Niall Murray who gets his first start in a Connacht jersey and there is no bigger challenge for him than going to the RDS to face Leinster.

“He has really developed his game and is an exciting prospect for the future. He has a good group of experienced heads around him so that is always a help when you’re making your first start.”

Leinster will equal their best ever start to a Pro14 campaign since the inaugural 2001-02 season, when they went on to win their first of six titles in this competition, should they make it 10 wins out of 10. It will be the surprise of the season if they don’t.