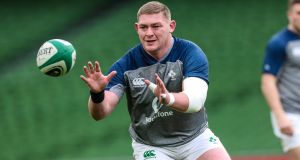 Tadhg Furlong: has been troubled by a serious calf injury for the last 11 months. Photograph: Dan Sheridan/Inpho

Tadhg Furlong is set to end 11 months of injury misery with a start for Leinster against the Scarlets this Saturday in Llanelli.

Should the Ireland and Lions tighthead come through the game without aggravating his calf, the 28-year-old will join Andy Farrell’s national team bubble in Carton House ahead of the Six Nations opener against Wales.

“I’m pretty certain that Tadhg will be into camp next week,” said Leinster coach Stuart Lancaster. “We’ll probably start him if he’s good to go. He did a full week last week [of training] so it’s been gradual progression, you don’t want to bring him back too soon, you want to make sure he’s 100 per cent confident in himself and he’s ready to go.

“But I think he’s ticking all the boxes, as they say, so fingers crossed he gets through tomorrow and then we’ll know further. He looks in fantastic shape, he really does.”

Leinster are also expected to include Jack Conan, Dan Leavy and Ryan Baird, three forwards that might consider themselves unlucky to be overlooked by Farrell, after they were declared fit this week.

“Ryan could easily be pulled in at any time, I’m sure, but if he doesn’t, for the likes of him, Harry Byrne, Ciarán Frawley, Dan Leavy, Jack Conan, they can have a good run of games now and Ryan definitely is going to be in and around the Ireland squads in the future. Whether it’s this Six Nations, ideally yes, but if it’s not this block will benefit him just playing week in, week out.

“He’s a bit disappointed but realistically he knows he’s still a young lad and he needs to prove himself with Leinster first.”

Leavy and Conan should be joined in the back row by medical student Josh Murphy.

“I think Jack recognises he just has to get a good run of games for Leinster now and himself and Dan are two good examples, and Josh as well, they’re three lads who could play for us this weekend in the back row.

“It’s not a bad back row to have when you’ve got 17 players missing.”

“I don’t think Johnny is too much of a concern...I don’t think anyone should be too concerned about that. I think James will be available for selection, he hasn’t played obviously but that’s obviously down to the Ireland coaches to decide whether he’s ready to play but he’s certainly training.”

Chelsea’s resurgence continues as they brush past Everton 20:29
Mullins string in fine fettle as they notch up a Leopardstown treble 20:25
Nothing of any concern found in inspection of Gordon Elliott’s stables 19:16
Reanne Evans and Ng On-yee offered professional tour cards 18:36
Leinster and Munster homing in on French opposition in Champions Cup draw 18:11
Here is your handy guide to sport on television this week