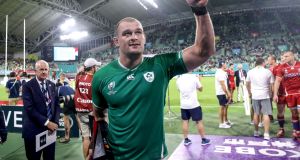 Leinster’s Rhys Ruddock has been included in the Ireland squad for the Six Nations. Photo: Dan Sheridan/Inpho

Craig Casey and Tom O’Toole are the two uncapped players named by Andy Farrell today in Ireland’s 36-man squad for the 2021 Six Nations. There are also recalls for Dave Kilcoyne, Tadhg Furlong, Rhys Ruddock, Garry Ringrose and Jordan Larmour, who were all sidelined by injury for the end of year Autumn Nations Cup.

The 21-year-old Casey, back-up scrumhalf to Conor Murray at Munster, has been picked ahead of Kieran Marmion, who drops out, and Luke McGrath, who doesn’t make the cut again.

The selection of the 22-year-old O’Toole looks an investment in the future as he is picked ahead of John Ryan who, like Ed Byrne, misses out.

O’Toole is generally second-choice tighthead behind Marty Moore at Ulster but despite the latter’s strong scrummaging he is clearly not regarded as mobile enough for Test rugby.

Furlong, who hasn’t played since the defeat by England in February last year, might possibly make his comeback along with James Lowe, who has also been named, for Leinster away to the Scarlets next Saturday.

Ruddock has forced his way in as a sixth backrower after a string of strong performances for Leinster this season. Otherwise, the remainder of the forwards chosen are unchanged from the Nations Cup.

With Jacob Stockdale ruled out with a leg injury, Hugo Keenan now looks favourite to wear the 15 jersey in Ireland’s opening game against Wales in Cardiff on Sunday week as he has been the regular starting fullback for Leinster of late, with Jordan Larmour playing on the right wing since his return.

If so, this would leave Lowe, Shane Daly, Keith Earls, Andrew Conway and Larmour competing for the two wing positions.

Johnny Sexton has again been named as captain in the presumption that he will recover from the hamstring injury which forced his withdrawal in Leinster’s win against Munster in Thomond Park on Saturday night, which Leo Cullen described as a precautionary measure.

The squad will assemble on Wednesday and go into a bio-secure bubble for the opening two games against Wales and France, both of which are on Sundays.

The squad will likely be re-assessed before the round three fixture at the Stadio Olimpico against Italy.

Farrell commented: “Since the Autumn international window the club season has had a good few disruptions and the cancellation of the European fixtures means there have been less opportunities for players to show form or to return from injury and get some minutes under their belts. Tadhg (Furlong) hasn’t played in quite a while but he is ready to join the group. Unfortunately Jacob (Stockdale) will not be available to us.”