Damian de Allende settling in at Munster after rollercoaster start 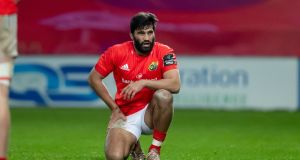 Munster have usually been at their best with an imported, big ball carrier and physical presence at inside centre and Damian de Allende certainly fits the jersey.

The 28-year-old World Cup winner is more in the mould of compatriots Trevor Halstead and Jean de Villiers than Rua Tipoki, who formed a dynamic midfield partnership with Lifeimi Mafi in their 2008 Heineken Cup-winning team.

In Munster’s 2006 Heineken Cup success Halstead reserved his best three performances for their knockout games, scoring in both the semi-final against Leinster and final against Biarritz.

If Munster are to end a nine-season trophy drought one suspects De Allende will also be a critical factor. Since arriving De Allende has talked about adapting to Munster rather than vice versa which, along with his body language, suggests he is very much a team man with little ego.

Clearly a good communicator, defensively he has been very sound, shepherding carriers into positions where he invariably executes his tackles. Come into the parlour, said the spider to the fly.

Munster have often employed De Allende as a decoy or to create space for others by leaving the ball behind him. But, akin to Halstead and de Villiers, given his explosiveness and power, with regular game time there is more to come from De Allende, especially in attack.

Interestingly, he admits he was “shocked” by both his debut against Leinster last August and his first European outing against Clermont, where the home side’s whirlwind start reminded him of playing with the Stormers against the Crusaders in Christchurch. In this, and much else, it’s been a little bit of a rollercoaster.

Following the Springboks’ World Cup homecoming, when also attending his brother’s wedding, De Allende relocated to Japan at the end of 2019 to play for the Panasonic Wild Knights. After the Top League was abandoned at the end of February, he and RG Syman weren’t able to fly to South Africa so, along with his girlfriend Domenica, De Allende eventually flew from Japan to Ireland last May.

There followed 14 days in isolation, varying levels of restrictions, the latest lockdown and no fans. He hasn’t been home since or played for the Springboks since the World Cup - all of which he admits has been tough.

Whenever he thinks of the 2019 triumph he says it makes him smile, and from talking with former Springboks when the Lions were hosted 12 years ago, De Allende admits it would be “sad” if the country was not to host the tour this year. But he agrees with Rassie Erasmus that above all they want to play the Lions in 2021.

“If we can play in South Africa it will be great but obviously like coach Rassie said, if it goes to option Z it is what it is and we’ll have to see what that is and just play it in whatever situation we can.”

Helpfully, his girlfriend’s mum has visited, as has his own mother, who returns to South Africa today.

“It’s lovely to see my mum but I think I would have preferred to see her in South Africa with all my family. There’s not much we can do about the situation. There’s no point in me getting upset about it and dwelling over it. There comes a time when you just have to get over it and live through it. I try to talk to my family at home as much as possible bit even if I went home for a bit I would still miss them as much as I have.”

Helpfully too, he has settled in well at Munster.

“If things weren’t going well I think it would be a lot worse than it is. It has been good. Everyone has played a very important role, from the players to the coaches to the management staff to the physios to the trainers.”

There’s also been a significant injection of young players this season and De Allende seems genuinely impressed by their skill levels.

“I think it’s been incredible. We have a different style of playing in South Africa, coming to the structures, but I think the thing that stands out the most for me is the amount of effort the youngsters put in off the field. The skill that they actually have at a young age, it’s not just passing and catching, it’s stepping and kicking off both feet.

“It’s that decision-making under pressure and I think that’s one thing that is very nice to see, especially in training when you get put under a lot of pressure. Then, when you get to the match, it’s like you’ve seen that picture already and that’s very nice when you’ve quite a few 19/20-year-olds in your team. They’re putting you under pressure and making you better as a player.”

There’s also the influence of Stephen Larkham, who has brought what De Allende describes as “the freedom of decision-making”.

“Every team has a bit of structure and sometimes you have to stick to the structure, but within that it’s whatever you see in that moment, just try and play it as naturally as you can.

“We’re all here because of a natural talent, and I think sometimes if there’s too much structure you can get a bit lost and almost play like a robot and not with your natural ability. It’s keeping it natural within the structure and that’s what he’s brought out the most in us.”

De Allende knew Johann van Graan from their time together with the Springboks and credits his coach not only with an appreciation of their attack but his all-round general knowledge of the game.

“The pictures he sees, whether that’s on attack or defence or kicking, it’s really awesome. He will probably get the most amount of flak if we lose or if things don’t go well, but the way he makes us believe not just in the structure but in each other, I think that’s really cool and really important. That confidence that he’s given us has benefited not just the individual but the squad as a whole.”

2 Budd Schulberg: The screenwriter who made Marlon Brando a star