Regrets for Munster as Leinster find a way, again 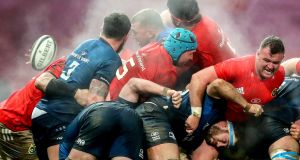 The cameras didn’t convey how wet and unhelpful conditions were at Thomond Park. Photograph: Inpho

No defeat will have hurt Munster more this season than this one and as Leinster headed back on the M7 through the freezing, snow-hit midlands, for all the performance’s imperfections, no win in this campaign will have pleased them more. It’s usually the case between these two.

Regrets? Munster will have plenty. Akin to the semi-final last September, JJ Hanrahan kicked them in front, but this time they deservedly extended the lead to 10-0 by the 12th minute. But as in the semi-final, they failed to score again, as Leinster once more came back to win with 13 unanswered points. Déjà vu all over again, as they say.

What will particularly gall Munster is that this time they really believed they could win and, as events transpired, they probably should have done so too.

Not alone did they deny Leinster two protracted sieges on their line - which few teams manage to do against a side who had scored a minimum of four tries in every game this season - but in between suffered a freakish six-point turnaround going into the break.

What were the odds on another 45 metre-plus penalty by Hanrahan cannoning off the upright and then, with Leinster content to kick the ball dead, TMO Joy Neville spotted that Rhys Marshall, following up, had hauled down Robbie Henshaw in accidentally losing his footing.

Sure enough, Leinster went down field and after James Cronin, whose ill-discipline undermined his performance, was pinged or not releasing Sexton trimmed the deficit to 10-6 rather than 13-3.

Ironically, after all the flak that came their way from pundits and Leinster after their emphasis on box kicking in last September’s semi-final, Munster had a huge return from Conor Murray’s pinpoint array of Garryowens.

Balanced against his constant running threat and, ultimately, his match-winning try, Jordan Larmour struggled under in the air, where he was outperformed by Shane Daley and Mike Haley.

There had been plenty of variety and width to Munster’s game as well as intensity in that impressive opening quarter but perhaps Munster were over encouraged by the narrow, 14-phase attack launched by Murray’s strong carry which led to Tadhg Beirne’s close-range finish, with help from O’Mahony and Jean Kleyn.

Hence, when Munster were pummeling the Leinster line soon after the interval, they perhaps should have used a penalty advantage to try something different than one-off or one-pass runners.

Andrew Porter, half-way up the ruck, had been pinged for offside directly in front of the posts. Between them, the officials wrongly decreed the offence was 15 metres to the right of the posts.

Hanrahan, who had kicked beautifully in the comeback win in Clermont, inexplicably pushed the penalty wide, thus reviving memories of two missed penalties in that semi-final.

For the watching Munster supporters in their various homes, there would have been a grim inevitability about the outcome from that point on. Sure enough, despite a prolonged second-half stalemate and losing Sexton, Leinster found a way, as they do.

From an undetected crooked throw and a nicely executed two phase play, Ross Byrne grubbered deftly and Hugo Keenan gathered and made a diving offload for Larmour to step inside Keith Earls.

It was completely out of sync with an increasingly grim arm wrestle, and Byrne even landed the touchline conversion.

No doubt the sides will meet again this season, even if we don’t know where or when, but although this was Leinster’s fifth successive win in the fixture and ninth of the last ten, Johann van Graan dispelled the theory that they have a mental edge over his side, or will have next time around.

“If you look at their last 12 games we are the only side that they don’t score bonus-point wins against, it’s literally one-score games so you know, they are currently better than us but it’s literally a moment away.

“If they had beaten us by four tries to one tonight I would have said yes, that might have been a psychological edge but the fact is we lost the game by three points and we didn’t use our opportunities, and it wasn’t wishy-washy opportunities.

“So by no means do I think it’s a psychological thing.”

By no means was it a classic either, but as ever, the cameras didn’t convey how wet and unhelpful conditions were. Maybe you had to be there?

Whether Munster would have drawn energy and inspiration from a packed house and seen this one through is a moot point.

Certainly, as predicted, home advantage was diluted by the absence of fans, but then again it was the same for both sides twice at the Aviva after the resumption.

In the heel of the hunt, it also followed a familiar script.