Eddie Jones forced to self-isolate after his assistant tests positive 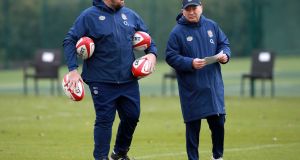 England head coach Eddie Jones is being forced to self-isolate for 10 days after his assistant Matt Proudfoot tested positive for coronavirus.

Jones is not displaying any symptoms and, if he returns a negative at the next round of testing, he will join up with the squad at St George’s Park next Thursday.

“England coach Matt Proudfoot has tested positive for Covid-19 and is self-isolating,” an RFU statement read.

“The test was carried out as part of England’s tournament testing regime for the upcoming Six Nations. He is not displaying any symptoms.

“Head coach Eddie Jones and Simon Amor have been identified as contacts and will also isolate for a 10-day period, in accordance with UK government guidelines.”

If Jones, along with Proudfoot and attack coach Amor, is proven to be free of Covid-19 then disruption to England’s Six Nations should be minimal.

Jones is due to name his squad for the Championship on Friday and, if his players come through their own testing procedures on Sunday and Monday, they will gather for the first time on Wednesday.

Their head coach will be able to link up with them the following day to begin preparations for the first instalment of their title defence, against Scotland at Twickenham on February 6th.

It is the second time in three days that England’s coaching team have been affected by coronavirus after it was revealed on Monday that Jason Ryles would not be available for the Six Nations.

Ryles, the respected skills coach, has chosen not to travel from Australia to London with his family due to the lockdown in place in the United Kingdom.

Of Jones’ front-line management staff, only defence coach John Mitchell is not currently affected by Covid-19.