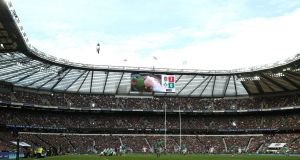 A view of Twickenham during the 2020 Guinness Six Nations match between England and Ireland. Photograph: David Rogers - RFU/The RFU Collection via Getty Images

An announcement confirming that the private equity firm CVC is to purchase 14.5 per cent of the commercial rights for the Six Nations as part of a five-year deal worth €409 million is likely to be made before the commencement of the 2021 tournament in less than four weeks’ time.

The respective Unions and Federations are reviewing the main terms of the partnership with their boards but it is widely anticipated that the deal will be ratified, not least as the six countries concerned all need financial investment.

The possible absence of supporters at all games in the Six Nations would likely cost a cumulative loss in excess of €100 million for the unions and federations.

With England and France the leading beneficiaries of the deal due to their greater broadcasting clout, the IRFU will probably receive in the region of €45-50 million.

The current tv contract, which sees coverage shared between the BBC and ITV in the UK as well as Virgin Media One in Ireland, S4C in Wales, France 2 and DMAX, which has maintained the principle of having all matches on terrestrial television, expires after the 2021 Six Nations.

However, to maximize their 14.5 per cent share of the championship’s commercial income it seems inevitable that some of the Six Nations’ games will be on pay-per-view television from 2022 onwards.

There will likely be several suitors in the latter category, given Sky’s relationship with rugby and with CVC, who sold the Formula 1 rights to Sky after paying about €1.56bn for its majority stake.

BT Sport have also invested in rugby to secure the rights to both the English Premiership and the Heineken Champions Cup, while Amazon Prime bought some of the rights to last year’s Autumn Nations Cup.

The expectation is that no country will be able to have more than three of their Six Nations matches on subscription TV only, with those games to have extensive highlights on terrestrial TV.

Meanwhile, the Six Nations and the French Federation had another meeting with the French government yesterday as they continued to make their case for the 2021 tournament to go ahead, with further meetings set to take place.

The Six Nations committee also met yesterday evening and it is expected that an announcement regarding both the women’s and Under-20s tournaments will be made today. The women’s Six Nations is likely to be moved back to an April/May window, with the Under-20 tournament to take place in early summer.

There is unlikely to be any statement regarding the men’s championship, with organisers holding to the belief that it will proceed as scheduled across all six countries.