Six Nations 2021: This feels like the real start for Andy Farrell’s Ireland 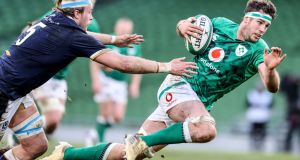 Caelan Doris has become a starter in the Irish backrow. Photograph: Dan Sheridan/Inpho

For Ireland, 2020 was supposed to be a fresh start. Joe Schmidt’s brilliant seven-year tenure had ended in disappointment, as his side limped home from the 2019 Japan World Cup after being schooled by the All Blacks. Andy Farrell took over and an new era beckoned, only it never really had the chance to get going - we all know why. The stop-start nature of 2020 was reflected in Ireland’s performances throughout the year. They bookended it with victories over Scotland in the Six Nations and the Autumn Nations Cup. They comfortably beat a struggling Wales side twice in Dublin and were twice outmuscled by England at Twickenham - so what’s new?

While it is difficult to take some of last year’s post-restart results at face value, some familiar themes were still present. Ireland were often narrow in attack, relying on heavy, one-off ball carriers to puncture opposition defences. The set-piece remains a weapon - although the lineout too easily malfunctioned. And in the biggest games, against England, they couldn’t win the physical battle. However, some solutions to these old problems also presented themselves.

Hugo Keenan has emerged as a fantastic finisher on the wing, while James Lowe is now a full Ireland international. Up front the limitless Caelan Doris has needed less than a year to cement his place in the backrow, with Ryan Baird in line to follow him off the Leinster conveyor belt and into a green jersey. Tadhg Furlong is likely to be fit after missing most of last year, with Dan Leavy also back in the mix. The provinces are doing well domestically and competition across the pitch will be fierce.

Home advantage will surely count for less with no supporters present but with France and England visiting Dublin, 2021 could be the year Ireland’s new era really begins.

The fragmented nature of 2020 makes it difficult to give a fair assessment of Andy Farrell’s first year in charge. Ensuring a seamless transition after seven years of Joe Schmidt would have been a difficult task in normal circumstances, never mind during a year where the entire sport of rugby - and the entire world - effectively shut down for months. Ireland started life under Farrell with back-to-back victories over Scotland and Wales, before old habits died hard against England at Twickenham. Form after the restart in the autumn was patchy, with Farrell coming in for criticism after some toothless performances.

However, there was still plenty to like about Farrell’s new Ireland - especially when it comes to personnel. He has blooded the likes of Doris and Keegan, Ronan Kelleher and Will Connors. He has some gun players fit again, with young and old shining at provincial level - the likes of Baird and Rhys Ruddock at Leinster and Gavin Coombes and Peter O’Mahony at Munster. Ireland’s squad looks very strong, with competition for places across the board (almost). Farrell’s recruitment of Paul O’Connell as forwards coach also looks very astute - not only will he help tighten up the lineout but he will drive the highest of standards. With a full, exciting complement of players to choose from - and in a year with some semblance of structure - we might see Farrell’s Ireland start to properly take shape.

No matter how strange life gets some things stay the same - including the importance of Johnny Sexton to Ireland. Now 35-years-old, Sexton is heading into his 12th Six Nations Championship but there is no sign of his influence wavering. Sexton earned his 100th Test match cap against Wales in November and remains one of the world’s best outhalves, and while he has picked up a number of niggles recently - and left the field during the recent Pro14 clash between Leinster and Munster - he is remarkably durable for someone who sucks up so much punishment in the number 10 channel.

The burden on Sexton is made more acute by the lack of an elite option to replace him with. Jack Carty and Ross Byrne are both solid if unspectacular back-ups, while it is unlikely Billy Burns will prove to be a long-term operator at Test match level. Joey Carbery has been dogged by injury while Munster’s Ben Healy and Leinster’s Harry Byrne are yet to earn their stripes at provincial level. Sexton can’t go on forever, but he remains key to Ireland’s Championship hopes for now.

Caelan Doris has been a revelation since he made his Test match debut against Scotland on February 1st last year. Already he has travelled Twickenham twice, and on both occasions has been one of the few Irish forwards to return from London with credit in the bank. 22-year-old Doris is a brilliant ball carrier, always able to burst the gain line through a mixture of lithe physicality and cunning footwork. And he also knows when to play the ball, with his handling skills and intelligent reading of the game allowing him to make space for others.

Add in his ability over the ball and willingness to do the dirty work and you have the complete Test number eight. Ireland have a wealth of options in the backrow but providing Doris stays fit it looks like the rest will be scrapping it out for two places, while his name will be firmly in the mix should this summer’s Lions tour go ahead.

The fixtures fall in Ireland’s favour this year, with France and England both visiting the Aviva Stadium, while an opening weekend trip to play Wales in Cardiff will be far less daunting at an empty Millennium Stadium. If Farrell can find the right blend between youth and experience - and if Paul O’Connell can help stoke the fire behind the scenes - then a serious title challenge is realistic.