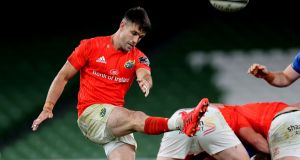 In the fall-out from Leinster’s Pro 14 semi-final win over Munster at the Aviva Stadium last September, Johann van Graan’s side copped plenty of flak for their approach and also some wry comments from Leo Cullen about a game plan which revolved largely around box kicking.

Van Graan was reminded of Leinster’s post-match reaction at his virtual press briefing on Tuesday, although they clearly haven’t forgotten it in Munster’s high-performance centre in the UL.

“I think you take every game and you do what’s necessary to win,” said their head coach before referencing Leinster’s tactics in their win over Ulster last time out, when pinning their opponents back with their kicking game after the interval to score four second-half tries.

“I’m glad that in the Ulster game two weeks ago, at least they used some of our tactics in that game as well, so that’s brilliant to see,” said Van Graan with a wry smile.

Next Saturday’s re-arranged meeting of the two sides at Thomond Park (kick-off 7.35pm) was originally scheduled to take place on St Stephen’s Day but was postponed after 16 false positives for Covid-19 in the Leinster camp. Now it comes as a convenient bridge in filling the void by the cancellation of rounds three and four in Europe, with the Irish squad for the Six Nations to be announced next Monday.

“Look, it’s another game in our season,” said Van Graan, who came armed with his statistics. “We have played nine games in the Pro 14 and won eight, and so have Leinster. They are definitely one of the form sides of the competition and of the last three years.

“They have played 11 games across all competitions this season and have 11 [attacking] bonus points, so they are such a quality outfit. We know it and they know it.

“I’m not a weather expert but it looks like it could be rainy and cold and snowy on Saturday evening so that will definitely play its part. It comes down to small moments and guys taking their opportunities. We didn’t take our opportunities in the semi-final and they did.”

Van Graan confirmed that Dave Kilcoyne and Jack O’Donoghue, both of whom missed last week’s win over Connacht due to minor knocks, as well as Jean Kleyn and Mike Haley, who have both completed their return to play protocols after suffering head injuries during that 16-10 win in Galway, trained on Monday and should be available for selection.

The rescheduling of this fixture also makes it more likely that Leinster will be fully locked and loaded as well.

“I’m not sure what Leinster will do but I imagine they’ve got quite a few guys available as well, so we’re looking forward to a good game. We’ve got big dreams for this season and this is another game. This is our first home game since the Quins game, which feels like months ago, so it’s the first one in six weeks at home.

“We’ll play in Thomond Park against a special club in Leinster, they’re currently the best and you always want to play against the best.”

Within hours of Munster losing their unbeaten record in this season’s Pro 14 at the turn of the year away to Ulster, Leinster also lost theirs at home to Connacht, but Van Graan gave the notion that this revealed the champions’ vulnerability short shrift.

“We’re playing against a team that has won their last 27 of 28 Pro 14 games, so that game didn’t show us anything. Connacht had a fantastic performance on the evening, what it does show is that every rugby game is different.

“Leinster were very convincing specifically in the second half against Ulster, they pinned them back, Ulster couldn’t get out of their half, and they scored four tries to zero with a convincing win at home. They’ve got international quality all over the park, so certainly no weak points in that team.”

On foot of Ronan O’Gara revealing that he had failed in an attempt to lure the Munster academy outhalf Jack Crowley to La Rochelle, Van Graan declined to say this reflected well on the set-up under his watch, preferring to play a straight bat instead.

“We’re in the middle of the season, we’re not going to confirm any contract discussions at this stage. Once we’ve got any contract update from Munster’s side, we will update you.”