Sugrue oversees transformation as resurgent Laois find a way back 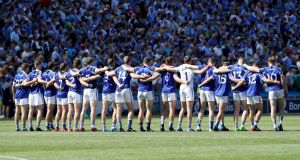 Laois line up for the Leinster final against Dublin at Croke Park. It was their first appearance in the decider in 12 years. Photograph: Bryan Keane/Inpho

When John Sugrue took over as Laois manager in late 2017, the job he faced into looked like trying to catch Niagara before it hit the rocks.

If Laois hadn’t had the worst two years of any team in football, they’d have been well fit to hold their own in the poor mouth stakes against anyone who wanted to claim that title for themselves.

It wasn’t that they were on the slide, it was more that they’d forgotten what traction felt like.

Over the course of 2016 and 2017, Laois lost more matches than all but one team in the country. They were beaten 14 times in 22 games – one fewer than Down, who could at least point to the fact that they’d spent one of those years in Division One.

Sugrue was a different case. A blow-in, sure. But their own blow-in

Laois were equal-opportunity victims – they got relegated from Division Two and then from Division Three, losing to Louth, Offaly, Sligo and Antrim along the way.

Clare put them out of the championship both years. In 2016, Laois were four points up with 20 minutes to go but didn’t score again and got mugged on the line.

The following year, Clare travelled to Portlaoise and wiped the floor with Peter Creedon’s side. The margin at the end was 10 points but it could have been anything they liked.

In the Colm Collins era, Clare are nobody’s easy mark but they had never beaten Laois in championship before 2016. Walking out of Portlaoise that night, you’d have been hard-pressed to imagine when next Collins would have anything to worry about in the fixture. His team was going in one direction, Laois were a bullet train heading in the other.

Into the role of brakeman came Sugrue, a south Kerry transplant living and working in Portlaoise.

An underage midfielder for Kerry in the late-’90s, he had been a physio in various dressing rooms down the years. Jack O’Connor and Pat O’Shea had him in with Kerry All-Ireland winning teams and he’d done stints with Laois and the Clare hurlers too.

Laois had plenty of outsiders come in and run the county team over the years but, with an established physio business in the middle of the town, Sugrue was a different case. A blow-in, sure. But their own blow-in.

When he took over, morale was down around the ocean bed. Just five seasons after they had pushed Dublin all the way in an All-Ireland quarter-final, they were down in Division Four.

Almost worse was the fact that there had been no obvious reason for the rotten year they put down in 2017. It had been a reasonably happy camp under Creedon – the players had, on the whole, quite liked and respected him. So there were no smouldering ruins for Sugrue to bulldoze away.

They just had to knuckle down and get going again.

There was one glaring issue, though. The Laois public had gone through all the stages by the time Sugrue took over, from anger to sadness to pure, distilled apathy.

Every county has a hard core but every supporter has a limit too. All but a tight few hundred in Laois had long since reached theirs.

With Portlaoise involved in the Leinster club championship, Sugrue organised a divisional tournament for all the other players in the county

That number swelled to around 1,100 for the trip to Ruislip in March but it was sheer novelty driving them rather than any great affinity for the new project.

Laois had won their first four games but they’d done nothing that wasn’t expected of them. Throw-in against London was Saturday lunch-time – there were plenty worse ways and worse places to put down a weekend.

Sugrue didn’t look the gift horse in the mouth. After Laois ground out a two-point win, he sent the team up to the bar in the clubhouse to mingle with their public. They hadn’t another game for a fortnight so they were granted a little shore leave.

After an hour or two, he got everyone out onto the pitch – players, officials, supporters, everyone – for a team photo. It was something and nothing and it didn’t have to mean a thing to anyone if they didn’t want it to. But something was clicking.

It helped that the fixtures fell Laois’s way. They had Antrim and Carlow for rivals in terms of promotion but the Antrim game was called off in the middle of The Big Snow and never got played in the end.

By the time they played Carlow in the last group game, both teams were already promoted. Beating their near neighbours there and again in the final a week later went down predictably well with the base.

Bit by bit, the county started to come back to them.

Summer cleared a path of sorts for them too. Kildare were the big dog on their side of the Leinster draw but they fell to Carlow.

Having already done Turlough O’Brien’s side twice, a third wasn’t going to stress Laois unnecessarily. And just like that, having earlier put Wexford and Westmeath away, they were in a first Leinster final in 12 years.

The Dubs did what the Dubs do but Laois finished 2019 in the last 12, keeping pace for most of the way with a Monaghan side that would go on to top their Super-8s group. By any measure, it was a positive year. The question now was what they could do with it.

Sugrue saw a wave and set about riding it by announcing a novel plan for the late autumn. With Portlaoise involved in the Leinster club championship, he organised a divisional tournament for all the other players in the county.

He invited players from clubs in all grades to come and play in three round-robin games and a final, starting the week after the county final.

It was essentially an extended series of trial games to see could he unearth anyone new for the 2019 county panel but, in presenting it this way, he got buy-in from pretty much every club player in Laois who fancied his chances.

Sugrue got jerseys made up and put selectors in charge of the teams and the money they took on the gate was sent to local charities.

Goodwill flowed, Sugrue found a few more bodies for the new year and the whole thing was another little jolt to the scene.

Through the league, Laois worked off a panel of around 40 players. After a few years when it looked harder to play yourself off the team than onto it, his line-ups have become notable for their variety.

After a bad defeat to Louth in the second round, Sugrue made eight changes next day out against Sligo. Point made, point taken.

That stat about only one team on the country having lost more games in the two years before he came into the job has been flipped entirely on its head. In his year and a half in charge, Laois have just four games out of 18 – fewer than any other team in the country except Dublin, who have also lost four.

Their 14 victories under Sugrue leaves them behind only Dublin (18), Galway (15) and Tyrone (15) in terms of wins in that timespan.

It may only be down in the basement stuff but they’ve done as much as has been asked of them.

They were the fourth-highest scorers across the four divisions in the 2019 league and have indisputably turned the train around.

Where it goes from here is down to them.

1 Rory McIlroy steadies the ship after shaky start at US PGA
2 Philippoussis wins but ballgirl steals the show
3 Maradona admits drug addiction
4 RG Snyman primed for hectic run with Munster and South Africa
5 America at Large: When not taking one for the team is the wisest course of action
Real news has value SUBSCRIBE