Josh van der Flier: Poachers need protection at the side

‘If someone comes in from the side you are pretty exposed, your knees, your ribs’ 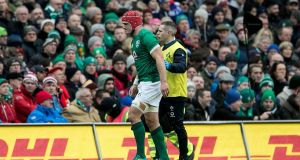 Seán O’Brien said it first. Players bent over bodies poaching ball need to be protected from opposition coming in from the side. Josh van der Flier agrees.

The groin injury that will keep van der Flier out until the summer wasn’t because of a player coming in from the side. But, this being a week of reflection on all things injured, his perceptions of the danger when players hit joints sideways is a cautionary tale of what dangers forwards put themselves in during play.

Van der Flier concedes that referees are on top of the foul. But his experience of jackling (tearing the ball from the opposition in contact) is that it puts him in positions where he leaves himself vulnerable for the lazy or deliberate side entry. That is full body weight hitting the side of a knee.

“If you’re going in for a poach you have people flying in at you, trying to get you off the ball. It is part of the game. It is one of the risks of the game, getting injured. It is still good fun. I’m not going to not go in for poaches when I come back,” he says, knowing to think any different would be talking himself out of a job.

“If someone comes in from the side you are pretty exposed, your knees, your ribs, that kind of thing. But refs are quite good about that. I suppose people are being legal and refs just need to be aware of that, that it can be dangerous if someone comes in straight from the side. Then obviously that’s not ideal if you’re poaching. Straight-on I find fine, anyway.”

It is not just a flanker issue. Brian O’Driscoll changed his game from a cutting-edge go-forward centre to a defensive 13 who would steal ball from anybody in his field range. All of the forwards do it. Tadhg Beirne has a reputation for it, straining over bodies and using his physical strength to rip the ball out of hands.

“It is physical all right in there,” adds van der Flier, residing in the comfort of a likely return for Ireland’s pre-World Cup phase.

Dan Leavy’s interest in that ended when the players wheeled his bed from the medical ward in the Aviva Stadium into the changing room, his last interest in this season and the beginning of next after a shattered knee.

“I suppose looking at the likes of [David] Pocock and [Michael] Hooper and Francois Loewe. The guys who are very good at the breakdown are quite low to the ground. But then I suppose you look at Tadgh Beirne and Max Deegan, people like that, they’re very impressive over the breakdown.”

That’s not to say van der Flier has a reservation on the flight to Japan in the autumn. The LP on the backrow is still playing out and will do throughout the summer. The irony there is migrant Jordi Murphy is smashing it in Belfast. Joe Schmidt holds a candle for nobody.

But it is also a two-sided coin as the Pro14 comes within a few weeks of the play-offs and Europe reaches the semi-final stages. Toulouse and Saracens or Munster await there. Van der Flier is at least confident of being on the pitch in August. There is some certainty about his body. Form will be another thing.

“I am grateful it will only be 12 weeks for me. Even though it is not ideal,” he says.

It is not often you hear that from a player.