Murray confident Munster won’t lack for direction when it counts

Should Carbery not be fit to face Saracens, classy Bleyendaal will be ready to step up 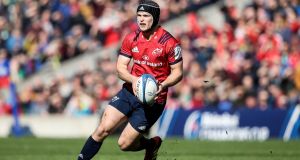 Joey Carbery’s exit from Munster’s match with Edinburgh rules him out of action against Cardiff this week. The pressing question is whether the 23-year-old outhalf can also include Munster’s European Champions Cup semi-final against Saracens in less than three weeks as a match too soon.

For Carbery it may be a valley of tears as Munster try and punch through for the first time at European level since the O’Connell and O’Gara era. But despite his growing currency as playmaker and creative influence, Conor Murray isn’t panicking.

“Joey’s been incredible,” says Murray.  “He’s a player who’s grown an awful lot this year. He was only 22 when he came down, a kid. He just stamped his authority on it.

“In meetings he started talking earlier and telling people what he wanted from them. He’s become a general and people are able to read what he’s going to do. He can be unpredictable at times, which is part of the magic about Joey. But I think people around him, the forwards have an idea of how he’s going to play. He has that magic, that flair, that running game that can break down teams and create a seven-pointer out of nothing.”

When Carbery hobbled off in Edinburgh, Tyler Bleyendaal arrived with defining poise and sangfroid. Troubled by injury for much of his time with Munster, the one-time captain of the 2010 Junior World Cup-winning New Zealand side has come full circle since his arrival in 2015.

Bleyendaal, in that year of Under-20 success, was among a group of players nominated for the World Young Player of the Year award which ultimately went to his team-mate Julian Savea. Carbery will be missed. But Bleyendaal has become a can-do calming presence and more.

“Tyler’s more of a laid-back kind of guy than Joey,” says Murray. “His knowledge of the game is incredible and he brings this calmness to the whole situation. Looking at him you wouldn’t think he’s playing in a quarter-final the way he steers the team around the place.

“Even jogging back after he nailed that conversion, he was relaxed. That’s the kind of effect Tyler has on the game. He’s struggled with injury and fitness for a while and to have him back getting a run of form is brilliant for us.

“If we are without Joey it’d be a bit of a blow. But I think Tyler is at that level, where everyone is comfortable with him coming into the team. You could say the same for JJ [Hanrahan], who is well capable of showing up on the day.”

Even before Bleyendaal washed up at Munster he was a young kid talking a lot of sense. In Crusaders, he was part of the leadership group in his early 20s, an old head on young shoulders and enthusiastic to learn.

As Murray tells, Bleyendaal was just in the door with the likes of All Black outhalf and three-times World Player of the Year Dan Carter. That willingness to glean information and then go on to disseminate it has been well learned.

“The respect Tyler has around the group is incredible,” says Murray. “He speaks such sense when he talks about rugby and tactics. People feed off him because he’s so calm about his message. He just has this aura around him that’s really invaluable to the team whether he’s fit or on the sideline.

“A really organised player, he gives clear communication to people around him. I think in the Glasgow game after Axel [Foley] died, the try he scored when he burned their 15 and showed a clean pair of heels, we were like ‘Jesus, you can sprint!” because he’s usually just chilled out telling other people what to do.”

Murray didn’t play against Saracens two years ago when the Premiership side beat Munster 10-26. But it heightened his awareness of how Munster have been climbing the European mountain only to be consistently denied a summit.

Saracens will be their fifth semi-final since 2012. Along the way Clermont, Toulon, Saracens and Racing have forced them out. A creeping ‘close but no cigar’ fatigue might be setting in.

Carbery or Bleyendaal in the No 10 shirt, Murray won’t mind. But if Carbery’s injury misfortune extends, the 28-year-old Irish qualified Kiwi, after his own physical struggles, could become the player he promised to be as a junior nine years ago.