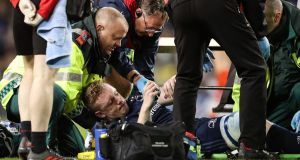 Leinster’s Dan Leavy receives treatment after he was injured during the Champions Cup quarter-final clash with Ulster. Photo: Billy Stickland/Inpho

Dan Leavy has said that the injury diagnosis which confirmed that he will miss the Rugby World Cup has “haunted his thoughts.”

Leavy came on as a second half replacement in the European Champions Cup match but was stretchered off the pitch just 10 minutes later, with what Leinster described on Monday as “a complex knee injury.”

It was confirmed that the flanker will miss Ireland’s World Cup campaign as Joe Schmidt’s side go in search of history.

Posting on Instagram on Monday, Leavy spoke of his devastation.

“Struggling to put into words how devastated I am with the injury,” he said.

“Firstly, to miss the business end of the season with my Leinster brothers and our opportunity to pursue another European and league title.

“Secondly, to miss an opportunity to play in a World Cup in Japan is haunting my thoughts.

“All I have ever aimed for in my career is the opportunity to shine on the world stage for my country and do the nation and my family proud.

“I fully back the Ireland boys to make a little bit of history as they always do and will watch on as number one supporter.

“I have been blown away by the messages of support and encouragement I’ve received already. I am blessed to have the family and friends I do and thank everyone for their well wishes.

“Looking forward to starting the road to recovery soon. I will be back.”