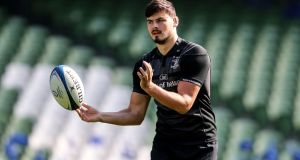 Leo Cullen has given some of Leinster’s young charges a chance in their clash with Benetton, with the province already safe in the knowledge that they have secured a home semi-final.

Max Deegan comes in to the openside role with Josh van der Flier and Dan Leavy both missing through injury and he will be partnered in that back row by Josh Murphy and Caelan Doris.

In total Cullen makes 13 changes from the team that beat Ulster last week to claim a place in the semi-finals of the Champions Cup with Barry Daly coming in at full back, Fergus McFadden on the right wing and James Lowe on the left.

Australian international Joe Tomane is partnered in the centre by Mullingar man Conor O’Brien, with captain Luke McGrath and Noel Reid the half backs.

In the pack Jack McGrath, James Tracy and Andrew Porter are selected to start in the front row with Mick Kearney and Scott Fardy in the second row.

West Indies sense victory over England after late surge 19:25
Jack Charlton’s own grievances endeared him to Irish fans 19:01
Capturing Irish hearts and falling asleep in the Vatican: Jack Charlton in his own words 18:11
Championship round-up: West Brom slip up at Blackburn 17:57
Burnley end Liverpool’s hopes of 100 per cent home record 17:08
Here is your handy guide to sport on television this week