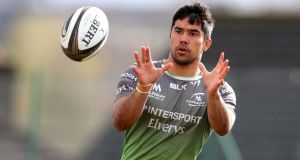 Connacht’s Jarrad Butler has come back into the side for their meeting with Zebre in the Pro14. Photo: Bryan Keane/Inpho

Andy Friend has recalled some of his big guns to the Connacht starting lineup for their meeting with Zebre as the western province look to come out on top in their battle with Cardiff for a playoff place.

If Connacht win on Saturday and Munster beat Cardiff on Friday night then Connacht can secure that playoff place by beating the Blues next weekend.

In the hope of doing that, Friend has made a host of changes which include recalling captain Jarrad Butler at number 8, who comes into a back row alongside Eoin McKeon and Colby Fainga’a at blindside and openside respectively.

Ireland International lock Ultan Dillane comes back into the second row alongside Gavin Thornbury, while in the front row, props Denis Buckley and Dominic Robertson-McCoy are selected alongside hooker Dave Heffernan.

Jack Carty and Caolin Blade form the half back pairing, with Carty shaking off an arm injury that caused him to be withdrawn last weekend.

In the midfield, Peter Robb comes in for his third start of the season alongside the impressive Tom Farrell.

In the back three Tiernan O’Halloran is named at full back with Matt Healy and Darragh Leader on the wings.