Geordan Murphy recruits Mike Ford in a bid to save Leicester 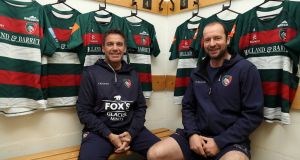 Mike Ford, who has been brought into the Leicester Tigers coaching team as a coaching consultant, with head coach Geordan Murphy at the Oadby Oval on in Leicester, England. Photograph: David Rogers/Getty Images)

Geordan Murphy believes his new coaching recruit, Mike Ford, will give Leicester “a bit of a kick” and help the struggling former champions avoid the looming threat of relegation from the Premiership.

Ford has been brought in as a consultant to try to generate some fresh impetus, with the Tigers five points off the bottom of the league with five games remaining.

Murphy, who was only appointed as the club’s permanent head coach in December, suggested a long-term role could yet await Ford if he can turn the Tigers’ fortunes around and stressed it had been his decision to hire the former England and Ireland defence coach.

“We have had a tough season and we needed a bit of a kick,” admitted Murphy, whose side host the league leaders, Exeter, on Saturday.

“We’ve been under the pump, down the bottom end in a little bit of a mire. To bring in someone with as much knowledge and experience was a no-brainer. When you bring in a new set of eyes, naturally guys respond to it.”

Ford, whose sons George and Joe are on Leicester’s playing staff, also believes the Tigers are good enough to survive.

“Sometimes, when you are down, you can’t see the wood for the trees,” said Ford Sr. “Leicester are a big club and maybe a bit of pressure has built up. I’ve got to free everyone up. Leicester are not far off. I’ve been in two or three days and the way they analyse and prepare is up there. We have got world-class players across the board. That is why I believe Leicester won’t get relegated.”

Murphy, however, concedes his first campaign as a head coach has been a sobering experience.

“The season’s been really tough,” he said.

“As a first-time head coach there’s a lot of things you don’t have the answer to. Confidence has been a little bit low but if it clicks no one will be talking about relegation. If you get a few wins you will climb the table very quickly.”

Elsewhere, Richard Wigglesworth has been appointed Ealing’s new attack coach. The 35-year-old scrumhalf intends to continue playing for Saracens and to coach at Ealing one day per week.