Pro 14 preview: Future uncertain but for now Leinster remain the team to beat 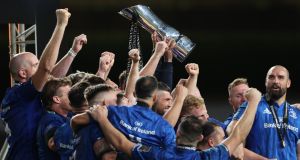 Leinster’s Rob Kearney and Fergus McFadden lift the Guinness Pro 14 trophy after the victory over Ulster in the final at the Aviva Stadium in September. Photograph: Billy Stickland/Inpho

The reaction to the probability of the four South African Super Rugby franchises joining an expanded Pro 16 has been mixed. By and large, the response has been positive hereabouts save for genuine and well expressed concerns, such as those from Gordon D’Arcy in these pages, whereas it’s been negatively received in, say, Wales, where they pine for the English clubs.

One thing’s for sure, it is set to significantly swell the tournament’s coffers. On foot of the Cheetahs and the Kings joining an expanded Pro14, South African TV, in the form of Supersport, brought in an estimated €6 million to the overall broadcasting pot, which amounts to around €22 million.

With the advent of the Bulls, Lions, Sharks and Stormers, those figures can only increase. Those four teams will bring significantly more supporters and subscribers, meaning that SA Rugby and the Pro 14 board, Celtic Rugby DAC, will agree to a larger annual fee for rights to the tournament.

Furthermore, the existing deals with the other broadcasters, Eir Sport, Premier Sport, and DAZN in Italy, along with TG4, S4C, BBC, Eurosport and others, come to a conclusion at the end of the upcoming season, 2020-21.

The organisers intend going out to tender in November and whenever they do, if negotiations to bring the quartet of South African teams into an expanded Pro 16 come to fruition, they will be selling a far more attractive tournament incorporating four new global brands.

At a time when rugby, like all sports and many other industries besides, is at a financial cliff edge, much like CVC’s investment, attitudes have shifted and potentially this tournament could provide a rare good news story.

Forecasting the season ahead is thus laden with difficulties. To sum up the uncertainty, after the opening eight rounds there will be three rounds of derbies and then a gap until March. At this point, depending on whether the pandemic permits the easing of travel restrictions, it could be that the South African quartet will enter the fray in some guise.

But, having played 11 matches less at that point, it will hardly be with the title at stake. More likely, they will be incorporated into a hybrid tournament as a dry run for a full-on, Pro 16 in the 2021-22 season.

Conceivably there may be no travel permissible between now and then, in which case we are in effect looking ahead to a Pro 12 rather than a Pro 14, which will then morph into a Pro 16. Alternatively, the advent of the South Africans at some point form next March onwards could shorten this season’s campaign.

As things stand, after the 2021 Six Nations there are nine weekends available to complete the 2020-21 campaign. At the very least, it’s likely that the return derbies will be accommodated, and perhaps also the return matches against the other four Conference rivals. This would mean either a 14- or an 18-game regular season with playoffs.

Once again the main contenders to prevent Leinster extending their record three-in-a-row into a fourth title look too be Ulster, Munster, Edinburgh, Glasgow and the Scarlets, while the competition could benefit from one of the others, perhaps Connacht, springing from the pack.

But one other thing seems certain. After this season, the competition is going to become a damn sight harder to win.

As ever, the champions have been the least active in the transfer market, preferring to promote from within, and no one does that better. Ryan Baird, especially, looks primed for a big campaign and even if both Johnny Sexton and Ross Byrne are away, Harry Byrne and Ciarán Frawley are exciting options. The painful European exit has left a hangover, but they will look to hit the ground running before delving into their unequalled conveyor belt during the Test window.
Prospects: Hmm, wild guess . . . champions?

Dan McFarland has overseen limited overhaul to his squad, albeit Alby Mathewson and Ian Madigan are strong additions. Reaching a Pro 14 final and a European Cup quarter-final demonstrated further improvement, even if a return of just one win in five matches post-lockdown and the nature of those defeats left McFarland and Ulster palpably concerned. Defensive issues out wide were a recurring problem and the ongoing absence of Will Addison is being felt.
Prospects: Early fixtures could prompt a quick start but hard to see them bridging last season’s 25-point gap to Leinster.

Topped Conference A for two years running before finishing third last season, it’s now six seasons since their breakthrough title and following on from the departures of Finn Russell and Stuart Hogg, a third key man in that triumph, Jonny Gray, has joined Exeter. His older brother Richie has returned after eight years away and in his first full season, true to type, Danny Wilson should have them well organised.
Prospects: Might challenge Ulster for second spot in what looks a weaker Conference A again.

Having qualified for the Champions Cup for the first time in a decade in his first campaign, and reached the Challenge Cup quarter-finals, Dean Ryan has further heightened hopes at Rodney Parade with the most high-profile acquisitions of the Welsh quartet. Nick Tompkins and Jonah Holmes have arrived from Saracens and Leicester, while at 33, Jamie Roberts could be a valuable addition. But 41-20 and 56-17 post-lockdown defeats by Scarlets and Bristol was a reality check.
Prospects: Six or seven wins would be a reasonable return.

The arrival from Benetton of Antonio Rizzi, who has a point to prove and may be better suited to Zebre’s more ball-in-hand game, supplements Carlo Canna, whom Michael Bradley sees playing more at outhalf rather than his new role of ‘12’ for the Azzurri. Led by Italy captain Luca Bigi, Zebre have a core of experienced players and finishing above the Ospreys last season, Bradley, entering his fourth season at the helm, is targeting a playoff place.
Prospects: Should do better than last season’s two wins but, akin to Benetton, six-game Test window adds to difficulties.

Capping a turbulent 18 months, two wins from 20 games last season marked an all-time low. Toby Booth is a good appointment, but warns: “We are trying to change quite a lot of things. Those things are deep-rooted so you have to un-learn them before you learn them.” Rhys Webb has returned in place of the departed Aled Davies while the ongoing absence of Gareth Anscombe and Luke Price has prompted the signing of the experienced Stephen Myler.
Prospects: On a level with Blues and dragons, but Booth impact might inspire a revival.

Topping Conference B marked their best regular-season campaign. The last-kick semi-final loss to Ulster and ensuing Challenge Cup quarter-final defeat by Bordeaux takes to four the number of knock-out setbacks in Richard Cockerill’s three seasons at the helm, meaning he should have them well primed again. Given modest dealings off the pitch, further improvement will come from the training ground, but no better man.
Prospects: Contenders again.

Should be stronger for the upcoming Test window, though losing RG Snyman was cruel. Johann van Graan has identified the need, a la Leinster, for their homegrown talent to step up, referencing John Hodnett, Craig Casey, Ben Healy, Jack Crowley, Jake Flannery and Liam Coombes. He also pinpointed one of just two home defeats in the last two seasons, against Edinburgh, for failing to top the Conference, but eight away defeats in last two seasons was costly.
Prospects: Should be vying for first place in Conference B, so avoiding a fourth semi-final in a row against Leinster.

The biggest budget and best squad in Wales, last season marked a revival for the champions of four years ago. Looked strong on the resumption, with a rejuvenated Samson Lee and Jake Ball in a strong tight five. ‘Jackaller’ supreme Josh McLeod is one of several openside options and the arrival of Sione Kalamafoni supplements the ball-carrying of Uzair Cassiem. Jonathan Davies has just returned, with Rhys Patchell due to soon, although no sign of Liam Williams yet.
Prospects: Should be serious contenders again.

Before his third campaign, Andy Friend has stamped his mark on a much changed squad over the summer, and certainly Connacht’s running game and appreciation of space caught the eye against Ulster post-lockdown. They’ll miss the talismanic Bundee Aki during the Test window but Sammy Arnold, one of several arrivals from Munster and Leinster, has stiffened midfield options. Much will depend on Abraham Papali’i filling the void left by Colby Fainga’a. Interesting and should be entertaining.
Prospects: If they are to break into top three, need to make hay while the Test stars are away.

Embarking on his third season, “consistency” has been John Mulvihill’s mantra after finishing sixth in Conference B last season. In truth, it’s been an issue for a decade. Cory Hill has arrived to resolve secondrow problems and Rhys Carré has returned from Saracens. But they’ll be among their missing Test contingent, hence an emphasis on their homegrown players, ie Max Llewellyn, son of Welsh lock Gareth, and openside James Botham, grandson of Ian.
Prospects: Mid to lower table looks likely.