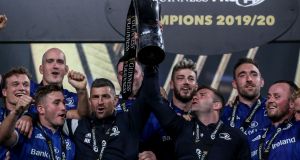 Rob Kearney and Fergus McFadden lift the Pro 14 trophy after the victory over Ulster at the Aviva Stadium. Photograph: Dan Sheridan/Inpho

Rob Kearney is set to finish his career with the Western Force in Australian Super Rugby. The highly decorated Leinster and Ireland fullback, who has not been offered a new contract after 15 years with his native province, is close to agreeing a deal to play for the Perth-based franchise in 2021.

The 34-year-old was always of a mind to continue playing beyond this season, although the global cessation of rugby as well as ongoing travel restrictions and financial constraints caused by the Covid-19 pandemic limited his options.

Kearney had also been linked with a move to Japan or to Brive, but it seems as if he is on the verge of relocating to Australia.

In a lengthy letter on the Leinster website, Kearney referenced his 219th and last Leinster cap against Ulster four weeks ago in the Aviva Stadium and added: “I hoped it wouldn’t be my last involvement in a Leinster jersey, but the reality is that in sport and professional sport especially, you just never know when you will get a chance again, so you treasure each chance you get in that jersey.

“It wasn’t my last involvement with the team and Ferg and I were granted the unbelievable honour of lifting a trophy on behalf of the 53 players two weeks later,” he added in reference to himself and Fergus McFadden lifting the Pro14 trophy after Leinster beat Ulster in the final.

“You always want one more as a player. The next one becomes the most important. The next match, the next trophy, the next training session even. That is the process, that is the drive within us.

“It wasn’t to be, but I am so very grateful for every run out that I did get in a Leinster and an Ireland jersey. Losing to Saracens brought my time in a Leinster jersey and by extension an Irish jersey to an end.

“I spoke to the players in the dressing room after the game and I spoke about living a dream because that is what I have done.

“I have lived the dream of every five-year-old boy or girl out there that dreams of pulling on a Leinster jersey, an Ireland jersey, a Lions jersey.

“I consider myself very fortunate to have done the greatest thing that I could have done with my life and I have lived the dreams that I first had as a young lad in Dundalk RFC with the minis.”

He thanked his mum and dad, his siblings Richard, Sara and Dave, his fiancée Jess and all those who helped him along the way from Dundalk, Clongowes and UCD through to Leinster and Ireland, as well as the supporters.

“You never get to write the script, but if I could, it would go as far as a packed RDS or Aviva in front of thousands of Leinster and Irish Rugby supporters where I would have had the opportunity to thank you all.

“The Leinster and Ireland supporters’ role in this journey has been special and running out in front of full stadia is what gives the greatest buzz and we have all missed that over the last few months and you appreciate it all the more now playing in empty arenas.”

Also thanking his manager and close friend David McHugh, Kearney signed off: “Thank you all once more and I look forward to being a supporter again, like I was as in Dundalk all those years ago. Rob.”

Leinster begin life post-Kearney, and last week’s anti-climactic Champions Cup quarter-final defeat by Saracens, with an A game against their Ulster counterparts behind-closed-doors at the RDS Arena on Friday evening (kick-off 7pm).

Charlie Ryan will captain the side from the secondrow but despite naming 15 players among the replacements, including Rhys Ruddock and Ross Molony, there is still no sign of a return for either Tadhg Furlong or Dan Leavy.

David Hawkshaw, named among the list of 15 replacements, could return to action for the first time since suffering a knee injury with Ireland under-20 in early 2019.

Munster have been assisting an academy player within the wider training squad who has tested positive for Covid-19 and has been self-isolating since Monday, has not been in the High Performance Centre this week. Three academy players and one senior player who have been identified as potential close contacts have commenced self-isolating.