Clubs being hit hard by the absence of spectators at games 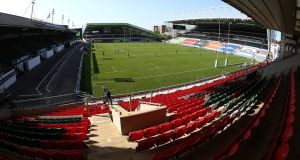 A telephone meeting of the top flight’s chairmen was held on Thursday morning to discuss a way through a crisis that has been renewed by UK government guidelines preventing fans from attending matches for up to six months.

For all the unified purpose in ensuring clubs and the league survive a second wave of the coronavirus pandemic, Tom admits the outlook is bleak.

“This is a disaster for Premiership Rugby and all the clubs involved,” said Tom. “I’m very worried about what the future for English professional rugby is. Nobody will be able to sustain this.

“Adjustments have been made to players’ salaries and other cuts have been made, but if we have to go another six to nine months like this, it will be absolutely devastating.

“Certain clubs have a different structure in the shape of an owner with lots and lots of money. But for the rest, these are brutal times.

“Myself and the board have two clear objectives – the survival of Leicester Tigers and improve our performance on the pitch.”

Premiership Rugby and the Rugby Football Union have applied for government bailouts and while Oliver Dowden, the UK secretary of state for digital, culture, media and sport, has indicated support will be offered, it is unknown what form this will take.

Even for a club of Leicester’s size, the finances are severely stretched after £500,000 was paid back to season ticket holders two weeks ago and £1.6million to £2million lost on having to stage four home games behind closed doors.

And with the RFU also being hit hard by the absence of spectators for their Autumn Nations Cup and Six Nations games, there could be a reduction in funding from Twickenham.

“We were early in realising the consequences in March and April. We had the public fallout with four of the players and we had to make 30-plus people redundant,” Tom said.

“We were starting to feel more confident, but now we’re having to completely rethink what we do.

“We came into this in a pretty strong financial position because we put the CVC money back into the business.

“Some fans may come under pressure financially because of job losses and things like that, so we have to assume we’ll lose season ticket money as well.

“We’re in as good position as anyone to get through this – except for the clubs with owners who have lots of money – but it will be brutal.”

Tom’s grim forecast has been echoed across the Premiership with Worcester owners Colin Goldring and Jason Whittingham revealing the Warriors are facing potentially ruinous losses.

“Playing matches behind closed doors for another six months is clearly not sustainable for this club nor for the Premiership as a whole,” a statement read.

“The additional loss of our events business puts further pressure on our chances for financial survival.

“Without revenue generated on matchdays from crowds, sponsors and their associated spend, Warriors and all professional sports clubs cannot hope to be sustainable without significant support.

“At the moment we do not know, even if it does arrive, what that support might look like.

“Until we have that clarity it is impossible for us to know what the future of professional rugby in England looks like.”