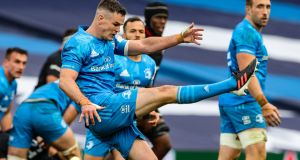 Johnny Sexton will captain Leinster in their Pro14 opener against the Dragons. Photograph: Billy Stickland/Inpho

Johnny Sexton will captain Leinster as they get their 2020-21 Pro14 campaign underway against the Dragons on Friday night.

The defending champions return to the RDS Arena for their season opener - athough there will be no supporters present due to the ongoing Covid-19 restrictions enforced in Dublin.

Leinster are back in action 13 days after their Champions Cup quarter-final defeat to Saracens, and Leo Cullen has picked a strong side for the visit of the Welsh.

Sexton is partnered in the halfbacks by Jamison Gibson-Park, with Ciarán Frawley and Garry Ringrose in midfield. There has been a reshuffle in the back three - Hugo Keenan starts at fullback with Jordan Larmour and James Lowe on the wings.

Up front Rónan Kelleher takes the number two jersey and lines out in between Ed Byrne and Michael Bent.

Scott Fardy and James Ryan are named in the engine room, with Rhys Ruddock, Josh van der Flier and Jack Conan in the backrow.

There is no place in the matchday squad for Dan Leavy, as he waits his return to action following a serious knee injury.

1 Six Nations - Ireland v Italy: Kick-off time, TV details, team news, standings and more
2 Dan Leavy gets back in the thick of things as Leinster trounce Zebre
3 Irish duo set for AFL Grand Final as sport lifts the gloom Down Under
4 Fresh faces and renewed appetite: Is this a new era for Irish rugby?
5 Mike Catt wary of young Italians and excited by Irish debutants
Real news has value SUBSCRIBE