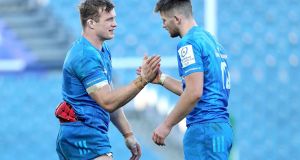 Leo Cullen declined to make an issue of the main talking point arising from his side’s 35-19 bonus-point win over Northampton at the RDS, namely Tom Wood connecting with the face/head of Josh van der Flier at a ruck in the 70th minute.

The French referee, Pierre Brousset, in tandem with his TMO Olly Hodges and his Irish assistants, did not deem the incident worthy of a yellow or, indeed, a red card, which many watching would have expected.

“I didn’t go into it in a huge amount of detail. I saw it and to be fair I know there’s some level of contact with head slash face but I’d need to look at it again. We’ll look at that and give our view. It goes through the normal channels,” said Cullen.

“All the incidents in the game will be looked at rather than looking at mass commentary in this forum. There is a forum for it where we give opinion to our referee assessors, so to speak, that’s deal with it and then obviously there’s a citing process which is separate to that again.

“It’s not just that incident. I’m sure there’s going to be other bits that I will look at from my side. Sometimes we get dragged into that as well by some of our actions.

Nothing given for this hit on Josh van der Flier.

“I want to watch the whole game back in close scrutiny with a view as to what goes on in some of the key moments of the game.”

Cullen also confirmed that Caelan Doris, a late withdrawal, has been bothered by a calf issue for a few weeks.

“Caelan has that calf [problem] from that Scotland game and felt it a little bit last week as well. He wasn’t feeling great today so we made that call. Josh came in and I thought Josh was good.

“Harry [Byrne] didn’t make it to the first kick-off. He gets a bang in the back doing that tackling drill just at the very end of the warm-up. We’re in the dressingroom and is he going to be okay? So we just make the call there – split second stuff.

“It looked like his back was about to seize up. That’s just one of those pretty innocuous things and huge credit to Ross for stepping in there. We’d already put Ciarán Frawley onto the bench and then Cian Kelleher steps in on to the bench.

“We reverted back to that 5-3 split from the bench, thankfully, so someone was looking out for us,” noted Cullen, as a clash of heads between Jimmy O’Brien and Garry Ringrose forced both to under HIAs. O’Brien failed his and will have to go through the return to play protocols whereas Ringrose passed his and returned, albeit he also subsequently took a bang on the ribs.

“So a lot of disruption and then before you know it Ciarán Frawley and Cian Kelleher are both on the field as well. It was a very strange start to the game.

“I thought we settled in and started the game okay but it was a bit disjointed after that. Even though we got a win and a bonus point I think guys are in the dressingroom there sort of scratching their heads as to what actually went on out there.”