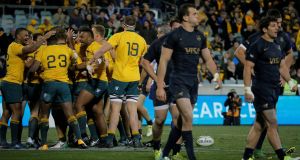 Australia scored five second-half tries to rally to their first victory of this year’s Rugby Championship with a 45-20 win over Argentina at a chilly Canberra Stadium on Saturday.

Outhalf Bernard Foley converted all six tries and kicked a penalty to help the Wallabies back to winning ways after they lost twice to the All Blacks and drew with the Springboks in their first three matches of the competition.

Argentina led 13-10 at halftime after bullying their hosts in the back-row contest but a first half try from Martin Landajo and a brilliant late consolation from Matias Moroni were not enough for a first win in Australia since 1983.

The Pumas head back to Argentina for their final two matches still searching for their first win of the Rugby Championship and only one victory, over Georgia, in seven matches this year.

Australia opened the scoring through Foley’s penalty but Argentina were dominating possession and Nicolas Sanchez levelled the scores in the 15th minute after the Pumas pack had rolled a maul deep into the home 22.

The Pumas butchered an opportunity to score the first try in the 20th minute when Sanchez’s pass to Emiliano Boffelli went forward but scrumhalf Landajo made no mistake four minutes later when he spun over the line from a ruck.

The visitors continued to make sure the game was being played in the Australian half and it was not until the half-hour mark that the Wallabies broke out to again square the contest.

Foley was twice involved in the sweeping move that sent Folau over in the corner, but the Pumas quickly resumed their territorial stranglehold and Sanchez slotted a second penalty to send his side into halftime with a slim lead.

Australia came out firing at the start of the second half and prop Kepu burrowed over the line from close range for a converted try to put them ahead 17-13 after 50 minutes.

The Wallabies were now playing more direct rugby up front and got their reward with a second try three minutes later when a lofted Will Genia pass gave Folau the space to cross again.

As the temperature plunged towards zero degrees Celsius, Australia just about weathered a period of intense Argentine pressure before the floodgates opened in the final 10 minutes after Pumas replacement Enrique Pieretto had been sin-binned.

Scrumhalf Genia cut through the defence to score in the 72nd minute, a searing touchline run and offload from number eight Sean McMahon gifted replacement Phipps his try and rookie hooker Uelese barged over for his maiden test try after the hooter.