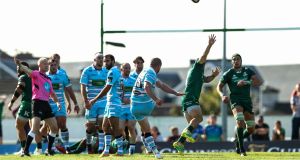 For a third successive season, Connacht succumbed to Glasgow Warriors on opening day of the Guinness Pro14 Championship, but on this occasion it was an agonizing one-point defeat.

When replacement Craig Ronaldson’s last gasp penalty grazed the post, it provided the Scots with a bonus-point victory, and denied Connacht a key early-season win under new coach Andy Friend.

The home side had held a 23-17 lead after an opening 40 minutes in which both sides took advantage of the dry ground at a sunny Sportsground, scoring five tries between them, but the experience of man of the match, international Stuart Hogg, who struck a winning drop goal on 73 minutes, was a sickening blow for Connacht.

Glasgow were out of the traps early, bagging the first try within two minutes - fullback Stuart Hogg kicking through for Tommy Seymour to ground out widow, with Peter Horne missing the conversion.

Connacht, not helped by some poor restarts, took advantage of an 11th minute penalty to open their tally through Jack Carty, and three minutes later, the outhalf’s superb cross field kick provided Cian Kelleher with the opportunity to bag his side’s opening try after some patient attacking play.

Connacht, however, with the pack content to take the ball into contact, ensured they made the hard yards to bring play right up to the line, and Blade’s pass found a willing Finlay Bealham, who sidestepped the defence and raced through for claim Connacht’s second try, with Carty again converting.

The sides were level by the 31st minute courtesy of captain Ryan Wilson’s try, but two penalties from Carty had the home side ahead at the break.

Connacht grew in confidence in the second half, taking control for long periods as Glasgow’s indiscipline at the breakdown proved costly.

Carty added another penalty, but they were unable to capitalise on Adam Hastings’ sinbin for a high tackle on Blade. Instead a penalty provided Glasgow with a rare incursion inside the Connacht 22 with a superb touchfinder from Hogg, and at the second time of asking the pack marched over the line with replacement Fusaro touching down, and Hogg adding the extras.

It turned the tide in Glasgow’s favour, but with nine minutes remaining Connacht’s superb defence had withstood Glasgow until Hogg’s experience eventually proved vital. A drop in the 73rd minute gave the visitors a one-point lead and ultimately victory as Craig Ronaldson’s long-range effort wide was just inches wide, in the dying seconds.